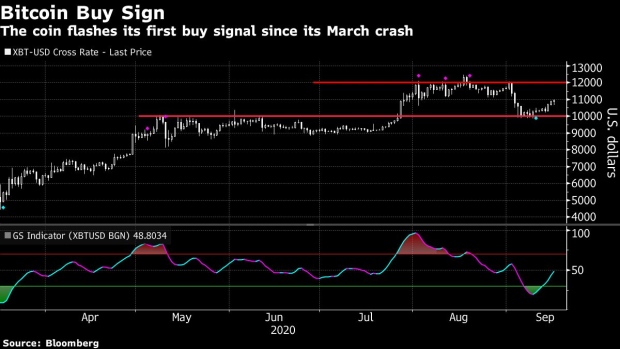 (Bloomberg) -- After wavering around $10,000 for weeks, Bitcoin could be poised for a breakout, technical indicators suggest.

Based on the GTI Global Strength Indicator, Bitcoin flashed its first buy signal since its March coronavirus-induced crash, after which it rallied 200% over a five-month period. Additionally, other gauges suggest any subsequent rally will need to take the coin over $12,000 for it to see a new high for the year.

Bitcoin rose as much as 2.1% Wednesday to $11,098. Most peer coins declined with Bitcoin Cash and Litecoin each falling over 3%.

“The price of Bitcoin is reflective of the belief that Bitcoin is a hedge against the overall global economy,” said Steve Ehrlich, chief executive officer and co-founder of Voyager Digital. “Bitcoin is extremely resilient and as it gains more and more adoption, in conjunction with better regulations suited to support Bitcoin, it continues to demonstrate its position as a reliable store of value.”

In case you missed it: A Trip Down the Crypto Rabbit Hole in Search of the DAO Hacker

The world’s largest cryptocurrency has oscillated between $10,000 and $12,000 this summer but is up about 100% since mid-March. Its advance comes amid widespread risk-on sentiment, with Bitcoin and other cryptocurrencies gaining in conjunction with U.S. equities. Crypto enthusiasts have also been heartened as of late by greater institutional participation, with firms like Fidelity Investments entering the space in recent weeks. Fidelity launched its first institutional Bitcoin fund at the end of August.

“Bitcoin’s key characteristics, such as its fixed supply and how transactions are immutable, distributed, non-sovereign and decentralized are highly attractive for investors in an uncertain but increasingly digitalized, tech-driven world,” said Nigel Green, chief executive and founder of deVere Group. “It has already earned it the label ‘digital gold’ and I believe its status in this regard will grow exponentially over the next year or two.”