Bitcoin is starting the year on a strong note, seemingly shaking off any negative sentiment it was mired in last year and on the verge of its longest winning streak in nearly a decade.

The largest digital asset was little changed on Tuesday after rising for 13 straight days — during which it’s added more than 25 per cent to trade above US$21,000 — approaching its longest span of gains since November 2013, according to data compiled by Bloomberg. The surge has helped lift the overall value of digital assets to almost US$1 trillion, data from CoinMarketCap show, a level it fell below in November following the crisis surrounding the FTX exchange.

Bitcoin rose as much as 2.1 per cent on Tuesday and was trading at US$21,219 as of 11:45 a.m. in New York. Other tokens have also gained, with an index of the 100 biggest coins adding around 2.5 per cent. Shares of some crypto-related companies were up even more, including those of Coinbase Global Inc., Riot Platforms Inc. and Marathon Digital Holdings Inc.

“It seems that macro investors are coming back in, but tentatively, and BTC is the gateway asset – the one they would most likely onboard first,” wrote Noelle Acheson, author of the “Crypto Is Macro Now” newsletter. 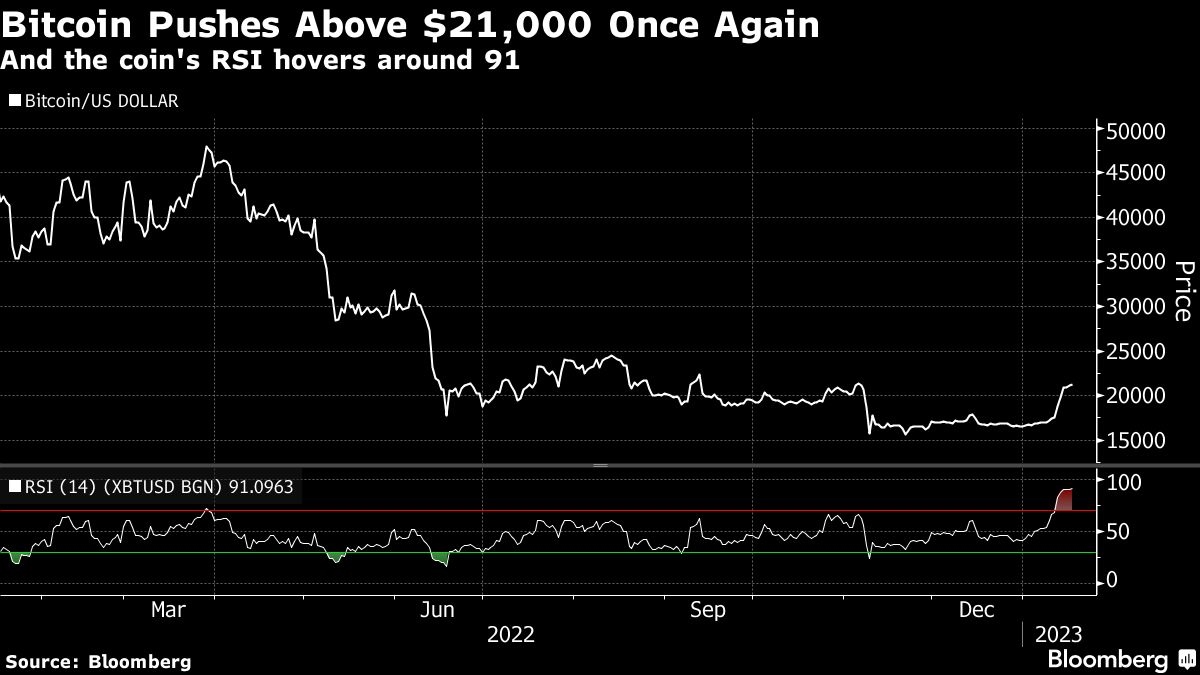 It’s a promising start to the new year for the token, which in 2022 fell 64 per cent in its second-worst annual performance on record. And the rally has renewed previously-dampened enthusiasm, with fans enthusiastically posting on Twitter about the fear of missing out on further gains — even as the industry is still grappling with one of its darkest stretches yet amid the fallout of the FTX empire and others.

Bitcoin has now pushed “astronomically” above 50-day moving average, according to Bespoke Investment Group, and it’s also trading above its 200-day moving average. Thus far, it has recovered most of the drop since prices plunged in the wake of the FTX collapse.

The coin’s 14-day relative strength index is now at 91. A reading of 30 or below is generally interpreted as an indication of an oversold security, while 70 or above signifies an overbought one.

Frank Cappelleri, founder of CappThesis, said overbought conditions have been bullish for Bitcoin throughout its history. He noted that the last two times the RSI punched above 80 were after a considerable preceding downturn.

To be sure, the 2022 slump has scared away both retail and institutional investors, who watched as some of crypto’s previously beloved companies imploded in embarrassing fashion. Trading volumes have plunged in crypto markets, which means that any activity can spark volatility. Trading volume hovered around US$48 billion over the past 24 hours, data from CoinMarketCap show.

Still, Bespoke notes that despite muted volumes, the past week has seen a surge of roughly 1.5 times more than the average of the past 50 days.

But what’s behind the renewed bout of enthusiasm? Several analysts, such as Adam Farthing, chief risk officer at B2C2, point to a lack of selling, as well as short liquidations, which have hit a high going back to July 2021 when Bitcoin bottomed at around US$30,000 — and consequently “ripped higher.”

“The primary reason for the speed of the moves appears to be short liquidations,” Farthing wrote in a note this week.

Meanwhile, other risk assets have also advanced to start the year, with the S&P 500 adding more than four per cent so far in 2023, and the Nasdaq 100 advancing near 6 per cent. Crypto analysts say that, too, is a big reason digital assets have been able to rally.

“We’re seeing a risk-on movement,” said Tony Roth, chief investment officer at Wilmington Trust Investment Advisors, referring to digital-assets. “Bitcoin at this point is the best-looking house in a relatively flawed neighborhood. There is a good chance Bitcoin will survive over time.”