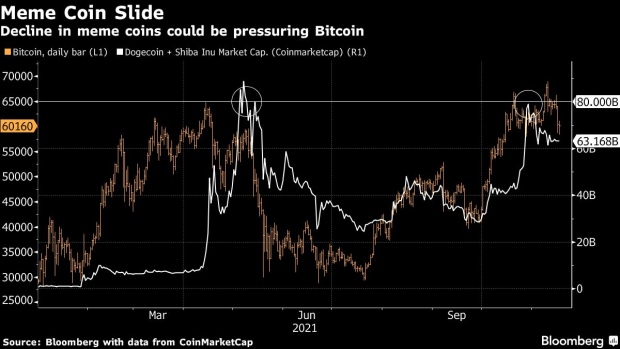 (Bloomberg) -- Bitcoin fluctuated around a key inflection point of $60,000 on Wednesday as traders appeared to rein in excessive speculation that’s sent the world’s largest cryptocurrency as high as $68,990 last week.

The digital token fell as much as 3.4%, before paring losses to trade flat around $60,170. The recent slide has been attributed to profit-taking ahead of the year’s end. But the decline of meme coins like Dogecoin and Shiba Inu also suggests cryptocurrencies may be “flushing out some of the speculation” driven by retail traders, Bloomberg Intelligence analyst Mike McGlone said.

“Some cleansing of meme coins might pressure the stalwarts as a necessary part of the evolving, strengthening ecosystem,” McGlone wrote in a note. “We say the sooner the better for the speculation machine coins to experience some purging, so as to move on with the adoption process of crypto assets in investment portfolios.”

The Bloomberg Galaxy Crypto Index, which measures price performance of the largest cryptocurrencies, was little changed on Wednesday, slowing its fall to about 12% from last week’s peak. Meanwhile, Dogecoin’s market capitalization is down from a high of over $80 billion in May to about $31.5 billion, while Shiba Inu’s value has fallen from its late October peak of $41 billion to $26.6 billion, according to data from CoinMarketCap.

“For the most part, people are going into the end of the year and taking gains -- taking some off the table -- as we head into a quiet period in the market,” Carter Henderson, portfolio manager at Fort Pitt Capital Group, said by phone. “People are just locking in gains.”

Bitcoin prices, up 108% so far this year, have been buoyed after reaching key milestones such as U.S. launches of three Bitcoin futures ETFs, despite a series of regulatory crackdowns in China and concerns over new tax-reporting requirements in the U.S.

“It’s a good battle” between longer-term buyers and leveraged speculators, he said.

Read More: Here Are Crypto Charts to Watch as Bitcoin Drops Below $60,000