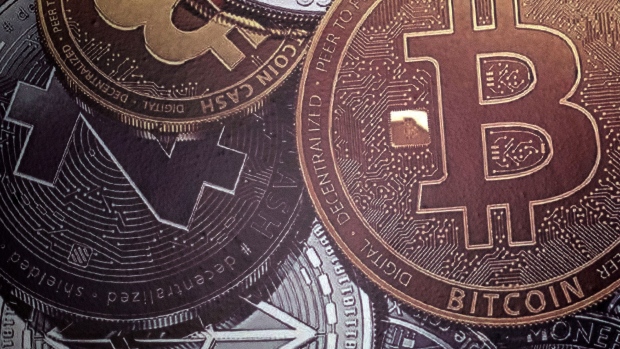 A banner depicting coins of various cryptocurrencies is displayed inside the cryptocurrency mining farm and school at the Ministry of Youth and Sports facility in Caracas, Venezuela, on Thursday, Feb. 22, 2018. Venezuelan President Nicolas Maduro said intended purchases of the country's cryptocurrency, known as the Petro, surpassed $1 billion in two days of sales. , Photographer: Carlos Becerra/Bloomberg/Bloomberg

For a sense of how tough 2018 has been for Bitcoin forecasters, look no further than Tom Lee’s latest cryptocurrency research report.

“We are tired of people asking us about target prices,” the co-founder of Fundstrat Global Advisors wrote in an emailed note to clients on Dec. 13. He continued: “Because of the inherent volatility in crypto, we will cease to provide any timeframes for the realization of fair value.”

In other words, Wall Street’s most prominent Bitcoin forecaster has given up forecasting Bitcoin.

The New York-based strategist, who declined to answer emailed questions from Bloomberg, couldn’t be reached by phone.

He’s far from the only one to miss the mark. High-profile prognosticators from BitMEX’s Arthur Hayes to Galaxy Digital’s Mike Novogratz were far too bullish this year as the crypto mania of 2017 gave way to concerns about increased regulation, exchange hacks and weak demand from institutional investors. Pessimists came out looking much better, of course, but even the they had trouble predicting exactly where the digital currency would land.

Below is what some of the biggest-name forecasters said in 2018 and what they see going forward.

The ex-Citigroup Inc. trader-turned-crypto magnate made waves with his US$50,000 prediction in May, but now acknowledges that the market could get worse before it gets better.

“I was bullish and I picked a nice round number with psychological significance,” Hayes said in an email. “With the benefit of hindsight, we are obviously in a bear market.”

Hayes said he’ll wait to see how Bitcoin performs in the first few weeks of January before issuing a 2019 prediction.

In November 2017, the ex-Goldman Sachs Group Inc. partner told CNBC that Bitcoin could “easily” reach US$40,000 by the end of 2018. By October, Novogratz was calling for ceiling at US$9,000. He has since pared his expectations even further.

The selloff has been particularly rough for his cryptocurrency merchant bank: Net realized and unrealized losses on digital assets at Galaxy Digital Holdings LP’s trading operation totaled US$136 million in the first nine months of 2018. Still, Novogratz struck an optimistic tone on a Nov. 30 conference call with investors: “I fundamentally think you’re going to see big adaption in 2019, 2020.”

The global macro strategist won fans in the crypto community after he accurately forecast Bitcoin would surge to US$2,000 in 2017. His January prediction for a gain to as high as US$100,000 was based in part on expectations that the introduction of regulated futures in the U.S. would attract institutional investors. Trading in the contracts has since proved tepid. Van-Petersen didn’t reply to requests for comment.

Quinlan got Bitcoin’s direction right in 2018, though his forecast will likely end up being a little too pessimistic when the clock strikes midnight on Dec. 31.

Looking ahead, Quinlan sees more downside. Bitcoin will probably fall to the mid- to low-US$1,000s next year, before reaching US$810 in 2020, he said in a Dec. 17 interview. One long-term risk is that governments will develop their own digital currencies and take steps to limit the influence of decentralized coins, Quinlan said.

The New York University economist has become a favorite punching bag for crypto fans, but it has been hard to argue with his bearish stance in 2018. In prepared testimony to the U.S. Senate Committee on Banking, Housing and Community Affairs in October, Roubini called the 2017 rally in cryptocurrencies “the mother of all bubbles” and described blockchain technology as a “glorified spreadsheet.”

“Blockchain is the most over-hyped -- and least useful -- technology in human history,” Roubini said. “No asset class in human history has ever experienced such a rapid boom and total utter bust and implosion.”

Only time will tell if Dr. Doom’s call for a drop to near zero will pan out.