The first Bitcoin-linked exchange-traded fund listed in the U.S. debuted as the second-most heavily traded fund on record in a watershed moment for the crypto industry.

The ProShares Bitcoin Strategy ETF -- trading under the ticker BITO -- rose about 4.9 per cent to US$41.94. More than 24 million shares changed hands Tuesday, according to data compiled by Bloomberg. Because of the way the fund settles trades, net flows into or out of the product probably won’t be known until overnight on Wednesday.

With turnover of almost US$1 billion, BITO’s debut ranked only behind a BlackRock carbon fund for a first day of trading, the latter of which ranks higher due to pre-seed investments, according to Athanasios Psarofagis at Bloomberg Intelligence. Bloomberg also reported that options on BITO will begin trading on the NYSE Arca Options and NYSE American Options exchanges on Wednesday.

Meanwhile, Bitcoin made a run at its record high of just under US$65,000.

“From our conversations with market participants, I think it’s related to the growing belief as the trading day goes on that this is going to be considered a successful launch,” said Stephane Ouellette, chief executive and co-founder of FRNT Financial Inc., a crypto-focused capital-markets platform. “Given the amount of avenues retail investors already have to participate in BTC, clearly the U.S.-based ETFs are nonetheless satisfying some kind of latent, even if niche, demand.”

A Bitcoin ETF has been long-awaited by both the crypto community and investors on Wall Street, many of whom have argued for years that approval by regulators would open up digital currencies to more mainstream investors. The ProShares fund is based on futures contracts and was filed under mutual fund rules that SEC Chairman Gary Gensler has said provide “significant investor protections.”

“We are really excited to bring BITO, the first Bitcoin-linked ETF, to investors as an important opportunity for them conveniently to invest in Bitcoin in their regular brokerage account,” Simeon Hyman, global investment strategist at ProShares, said on Bloomberg TV. “This is going to allow many people who have been waiting for an easy way to do this and a robust way to do this to now be involved and have it in their portfolios.”

Retail investors rushed to buy the ETF Tuesday. BITO was one of the most-bought assets on Fidelity’s platform with more than 8,800 buy orders coming from customers as of 2:55 p.m. New York time. 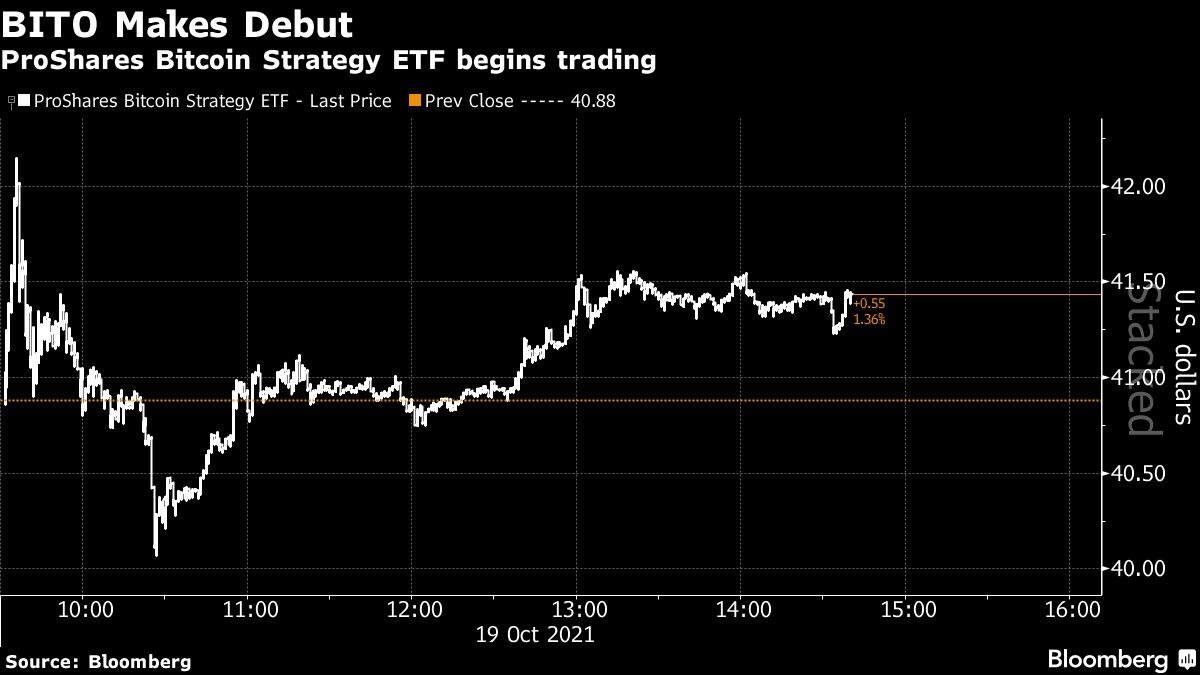 It’s long been assumed that whoever received approval first could stand to reap the greatest benefits -- including industry recognition as well as potentially attracting huge amounts of cash. Some analysts are already bullish on BITO’s prospects -- the futures-based Bitcoin ETF could attract more than US$50 billion in inflows in its first year given the hype around it, according to noted Bitcoin bull Tom Lee, co-founder of Fundstrat Global Advisors.

There are other applications for futures-based Bitcoin ETFs in the queue. Analysts are anticipating launches from issuers such as Valkyrie, whose Bitcoin Strategy exchange-traded fund could trade under the ticker BTFD.

Meanwhile, Grayscale Investments LLC and the New York Stock Exchange filed to convert the world’s biggest Bitcoin fund, ticker GBTC, into an ETF, appealing to regulators for approval just as its wildly popular vehicle is beset with competition.

Market-watchers have a few measuring sticks with which to gauge BITO’s initial reception. The SPDR Gold Shares fund, ticker GLD, had the fastest-ever climb to US$1 billion in assets under management, reaching the landmark in just three days, according to Bloomberg Intelligence. More recently, the VanEck Social Sentiment fund, ticker BUZZ, saw more than US$400 million worth of shares traded on its debut earlier this year, one of the highest amounts ever for an ETF on its first day.

“This is likely going to be the biggest launch of all time,” said James Seyffart at Bloomberg Intelligence. BITO is bound to pass VanEck’s BUZZ launch, he said.

Seyffart added that the top launch and all launches above BUZZ’s had backing from pre-seeded institutions, which had been lined up to invest into the funds for hundreds of millions of dollars. “It’s likely not going to pass some of these funds that traded over a billion in the first day due to hundreds of millions from an institution or two that was lined up prior to launch. But it should pass BUZZ for what we tend to refer to as an ‘organic’ launch,” he said.

Bloomberg News reported last week that the U.S. Securities and Exchange Commission wasn’t going to stand in the way of the launch of a futures-backed Bitcoin fund.

Gensler has been viewed as being more open-minded toward crypto than his predecessor, Jay Clayton was. Observers cite Gensler’s previous interest in the crypto world -- he once taught a class at MIT’s Sloan School of Management called “Blockchain and Money.” And the chairman had over the summer signaled that regulators may be more open to a Bitcoin ETF if it were based around futures rather than the cryptocurrency itself.