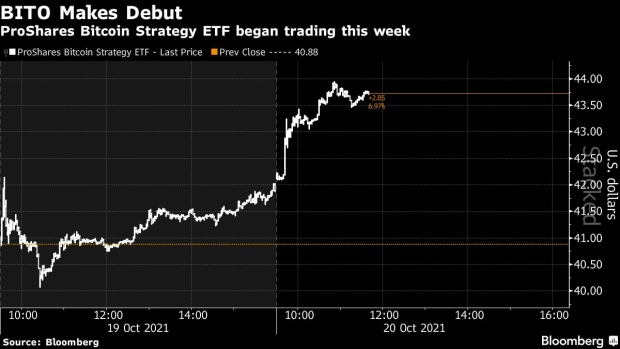 (Bloomberg) -- The race is on to cut costs in U.S. Bitcoin futures exchange-traded funds, just a day after the first ETF launched.

The VanEck fund’s effective date is Oct. 23, the firm stated in an updated prospectus. And a VanEck spokesman said the firm anticipates launching it “as soon as practicable” after that.

“The decades-long fee war has a new battle with Bitcoin ETFs,” Todd Rosenbluth, head of ETF and mutual fund research at CFRA, wrote in an email. “When an ETF comes to market second or third with a nearly identical product, it can be at a disadvantage unless it can stand out with a lower fee.”

Fights over fees are nothing new in the booming $6.8 billion ETF industry, as each new fund seeks to gain market share by offering a lower price than the competition. Actively managed funds are able to charge slightly more than passive ETFs, with the average fee for active equity funds clocking in at 0.71%. BITO is actively managed, and the prospectus for XBTF indicates that it will be as well.

“We were the first asset manager to file for a Bitcoin futures ETF, and we are offering what would be most competitively priced ETF when we come to market,” said Ed Lopez, head of ETF product at VanEck.

The 30 basis point difference in management fees should help the VanEck ETF attract demand, even after the ProShares fund’s record-shattering debut. More than 20 million shares of BITO traded on Tuesday, ranking it as the second-busiest ETF launch ever.

“Investors are looking for the cheapest way they can obtain exposure” to Bitcoin, said Mohit Bajaj, director of ETFs at WallachBeth Capital. “Especially if the instruments they are choosing between are correlated.”