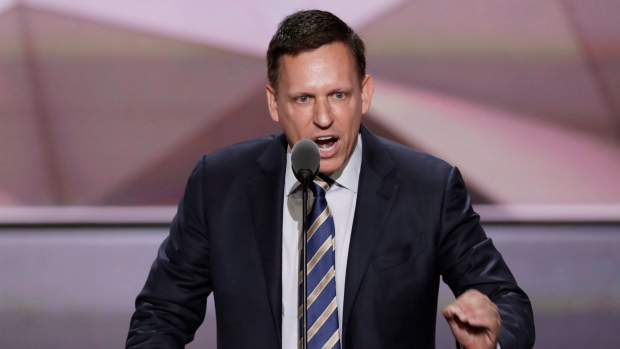 In this July 21, 2016, file photo, entrepreneur Peter Thiel speaks during the final day of the Republican National Convention in Cleveland. , The Canadian Press

The price of bitcoin surged on Tuesday afternoon following a report that billionaire investor and PayPal co-founder Peter Thiel is betting big on the cryptocurrency.

The Wall Street Journal reported that Thiel has “amassed hundreds of millions of dollars” in bitcoin through his venture capital firm, Founders Fund, after investing upward of US$20 million in the cryptocurrency.

Thiel was an early investor in Facebook, sinking $500,000 for a 10.2 per cent stake in the social media company in 2004. Thiel has sold the majority of his Facebook shares since the company went public, worth over $1 billion.

According to The Journal, Founders made its investment prior to recent volatility in the cryptocurrency, which has been rocked by South Korea’s plans to crack down on bitcoin investing and bitcoin bull Michael Novogratz’s decision to scrap his plans to launch a cryptocurrency hedge fund.

Editor’s note: An earlier version of this story included an inaccurate headline. BNN regrets the error.