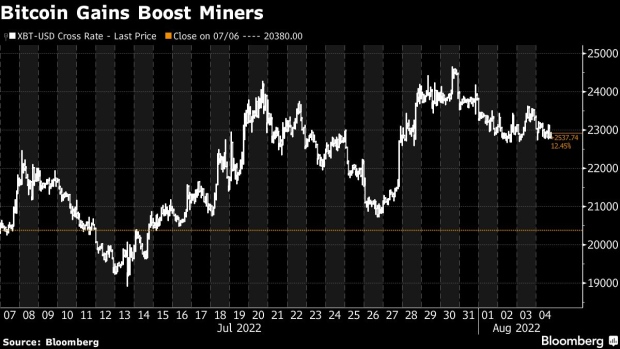 Mining units at the Cormint Data Systems Bitcoin mining facility while under construction in Fort Stockton, Texas, U.S., on Friday, April 29, 2022. Cryptocurrency miners who have descended on remote parts of Texas to feast on cheap electricity and inexpensive land are finding themselves surrounded by dusty fields with hardly any residential housing. Photographer: Jordan Vonderhaar/Bloomberg , Bloomberg

(Bloomberg) -- A rise in the price of Bitcoin has prompted some miners of the cryptocurrency to switch on more rigs over the last two weeks even with much of the US still caught in a heat wave that boosted demand for electricity.

The mining difficulty rate, which indicates the amount of computing power of the banks of computers used to generate Bitcoin, rose by 1.7% in the last two-weeks, according to blockchain network data released Thursday. The previous bi-weekly adjustment rate dropped to its lowest since nearly a year ago as miners turned off rigs. Electricity is one of the biggest expenses for miners.

While many Bitcoin miners shuttered operations as electricity prices soared amid the heat wave, the rebound in Bitcoin prices over the period boosted mining revenue and prompted more miners to turn back on their machines. Bitcoin has risen 6.2% to around $22,930 since July 7.

“The Bitcoin price increase has led to increased profitability for miners and some miners who were pushed offline in June and July have likely plugged in their machines again,” said Jaran Mellerud, crypto-mining analyst at research firm Arcane Crypto.

Bitcoin miners have flocked to the southern states such as Texas and Georgia, where they typically benefit from lower priced energy and looser regulations. A record heat wave in Texas in early July resulted in a power crunch that pushed nearly all industrial scale mining companies to shut down their rigs in the state.

The large miners in Texas halted their mining operations due to the high electricity prices, also driven by the fallout from the Russian invasion of Ukraine.

Some of the miners are also participating in demand response programs with the state power operator known as the Electric Reliability Council of Texas, in which they voluntarily curtail energy consumption during peak hours and can get compensated later. Riot Blockchain Inc. said Wednesday that it earned about $9.5 million in credits last month from shutting down its Bitcoin mining rigs at a Texas facility.

“In July, many American miners unplugged their machines as part of their participation in demand response programs,” Mellerud said. This led to a considerable drop in Bitcoin’s computing power in that month, he said.