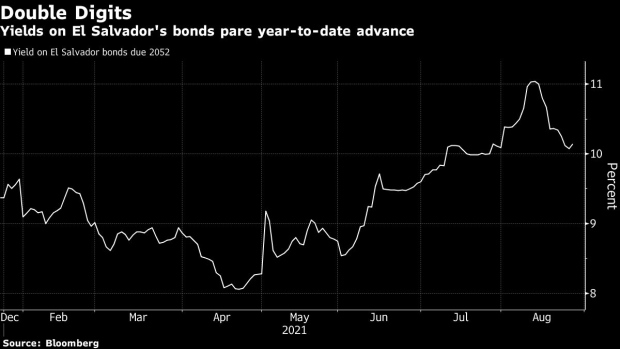 The crypto-crazed crowd is a big fan of El Salvador President Nayib Bukele, a fellow traveler who is making Bitcoin an official currency of his nation.

The bond market has started warming up, too.

El Salvador’s bonds are rebounding from a rout that extended into early August as the country was downgraded deeper into junk and concern mounted about the risks posed by the Bukele’s Bitcoin move and push to change the constitution.

In the last two weeks, they’ve returned 7.6%, more than the dollar-denominated debt of any other country besides Zambia, where the new president’s landslide victory bolstered speculation he can steer the country out of a default. Still, the bonds have lost 12.8% since the last trading day of April, as the country struggles to reach a deal with the International Monetary Fund.

Carlos de Sousa, an investor at Vontobel Asset Management in Zurich, said the nascent turnaround reflects how deeply the securities had fallen.

“It got to a point where it was ridiculous,” he said. “Neutral news or even relatively positive news came out and bond prices kept sliding. As people saw it, if there was a headline on El Salvador, sell, don’t even bother reading it.”

Bukele, 40, sowed concern among investors after his allies in Congress voted to fire five of the country’s top judges in May. He has also pushed to extend the presidential term to six years as part of a broad overhaul of the constitution.

The perceived power-grab created a rift with the U.S. that cast doubt on whether El Salvador could secure a new agreement with the IMF, which also said the adoption of Bitcoin could bring new financial and regulatory risks. On July 30, Moody’s Investors Service downgraded El Salvador to seven steps below investment grade, citing controversial policies.

Investors have also been reassured by the country’s economic strength. Its central bank said earlier this month that gross domestic product will grow 9% this year, up almost three percentage points from the June forecast.

“In a sense, it has been a turning point because investors who were disappointed by Bukele after the election, already adjusted their portfolio, and now others, or even the same ones, are looking to reposition knowing all the negatives,” de Sousa said.

Moreover, there’s no major foreign debt payments coming until January 2023, buying the government time to steady its finances. Both Bank of America Corp. and Morgan Stanley now have a positive recommendation on El Salvador’s bonds. Siobhan Morden, head of Latin America fixed income at Amherst Pierpont, said last week that the odds have risen slightly of striking an IMF deal.

While the IMF has raised doubts over the adoption of Bitcoin, authorities have addressed concerns. Rules published by the central bank last week said it won’t be mandatory for business to accept Bitcoin once it becomes legal tender next month. Money laundering laws will also apply to the cypto-currency and the so-called Chivo wallet -- which will allow people to make everyday purchases with Bitcoin  -- won’t be anonymous, allowing regulators to more easily track it.

The IMF didn’t reply to questions on the status of the negotiations with El Salvador.