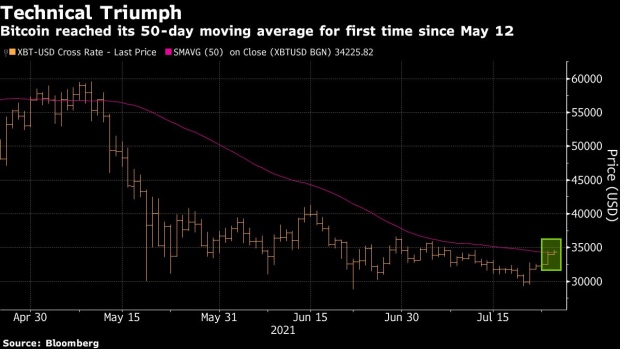 (Bloomberg) -- Bitcoin traded above a crucial technical level over the weekend for the first time since early May, after comments from Ark Investment Management LLC’s Cathie Wood and Tesla Inc. Chief Executive Officer Elon Musk helped boost its momentum.

The largest cryptocurrency rose above its 50-day moving average on Saturday for the first time since May 12. It rose again Sunday, its fifth consecutive day of gains, to as high as $34,609.

Bitcoin had looked to be in danger of further declines after it fell below $30,000 earlier in the week, a level widely flagged by strategists as potentially spurring further drops. But it got a boost when Musk -- at “The B Word” conference on Wednesday -- said he wants Bitcoin to succeed and that his space-exploration company SpaceX Inc. owns some. Wood said corporations should consider adding Bitcoin to their balance sheets, while Square Inc. CEO Jack Dorsey said the coin is resilient.

“For the first time in many weeks we are seeing bullish signs here and expect Bitcoin to head toward the upper end of the $30,000 to $40,000 range,” Pankaj Balani, CEO of crypto-derivatives exchange Delta Exchange, said in an email Friday. Options activity indicate that $35,000 could act as a ceiling for Bitcoin for July, he said, but added that in the next couple of months “Bitcoin should face little resistance between $35,000 and $40,000 levels.”