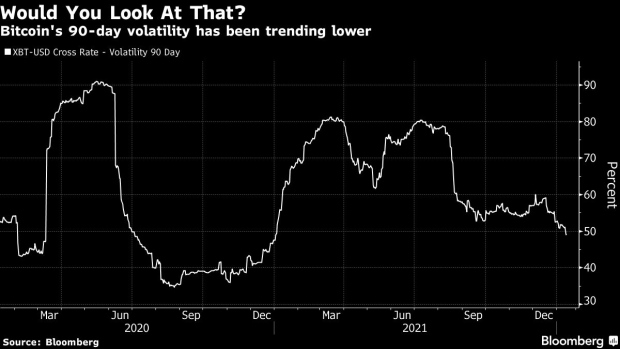 (Bloomberg) -- As Bitcoin remains well-off its record highs, advocates are finding glimmers of hope for the world’s largest cryptocurrency by analyzing the makeup of its investors.

Even with the gain so far this week, the token is still down over 30% from its November record near $69,000. But on-chain data suggests that more investors are “hodling,” or holding onto their Bitcoin -- and for longer amounts of time than before.

According to Noelle Acheson, head of market insights at Genesis Global Trading, about 75% of Bitcoin currently in circulation is held up in so-called illiquid addresses, meaning digital wallets that spend less than 25% of their incoming coins. Meanwhile, about 57% of Bitcoin in circulation hasn’t moved from the anonymous addresses in over a year, in a sign of long-term holders.

Hodl has been the mantra of cryptocurrency believers during market routs since the earliest days of the digital-asset world, when “hold” was misspelled by a frenzied Bitcoin trader on an online forum in 2013. Anyone willing to stomach the volatility is thought to be hodling.

Read more: What the Heck Is Hodl? Bitcoin Lingo for Crypto Noobs: QuickTake

To Acheson, the increasing amount of illiquid supply explains why Bitcoin’s daily price movements often mimic those of other risk assets like stocks. While long-term Bitcoin holders are simply accumulating the token, short-term traders view and trade the coin like a risk asset, and their actions drive the daily price movements that often seem to react to macro-trends like inflation data.

In fact, since July 2021, there has been a steady transfer of coins from short-term holders to long-term ones, a trend that has upped the illiquid supply of Bitcoin, according to Blockforce Capital’s Brett Munster, who analyzed Glassnode data. As prices dropped last month, the transfer from liquid to illiquid wallets accelerated.

“This provides a strong base of holders who are unlikely to sell,” Munster wrote in a note this week. It could even be the case that, due to this base of “staunch Bitcoin believers,” the recent leverage liquidations hadn’t caused a larger drop in prices and have kept Bitcoin’s price relatively range-bounded in the last several weeks, he said.

Meanwhile, a metric referred to as Bitcoin’s “dormancy flow” is flashing a historically bullish signal. The flow measures the number of days since a token was last sold -- called Coin Days Destroyed -- and puts it in the context of the total market capitalization of the token. The measure has now fallen below a key level that has signaled market bottoms in the past, according to Acheson.

“This seems bullish, but these days crypto prices are driven by different concerns than in March 2020, January 2019, etc., so should not be taken at face value. Still, signals like this are worth keeping an eye on,” she said.

Meanwhile, the coin’s 90-day volatility has been trending lower, Bloomberg data show. To Mike McGlone at Bloomberg Intelligence, that makes sense. “Bitcoin volatility normally increases when prices are probing new highs,” he said. It’s “at about the same price since February, and declining volatility is indicative of a consolidating bull market.”