Bitcoin traded in a narrow band around US$20,000, with investors less willing to take big risks after Federal Reserve Chair Jerome Powell reiterated the central bank’s commitment to keep raising rates in the fight against inflation.

The largest token rose as much as 2 per cent on Monday to US$20,412 after trading below that key round-number threshold over the weekend. Other cryptocurrenices were mixed. Equities -- which plunged on Friday in the wake of Powell’s remarks -- extended declines, with the Nasdaq Composite index shedding 0.7 per cent as of 2:20 p.m. in New York.

The US$20,000 level acted as support for Bitcoin when it hit lows in recent months, but the cryptocurrency had worked its way higher in recent weeks. Before Saturday, it hadn’t been below that mark since July 14, and had even crossed above US$25,000 earlier in August. That mini-rally was cut short as rate-hike concerns intensified, and Bitcoin has fallen some 17 per cent since Aug. 15. 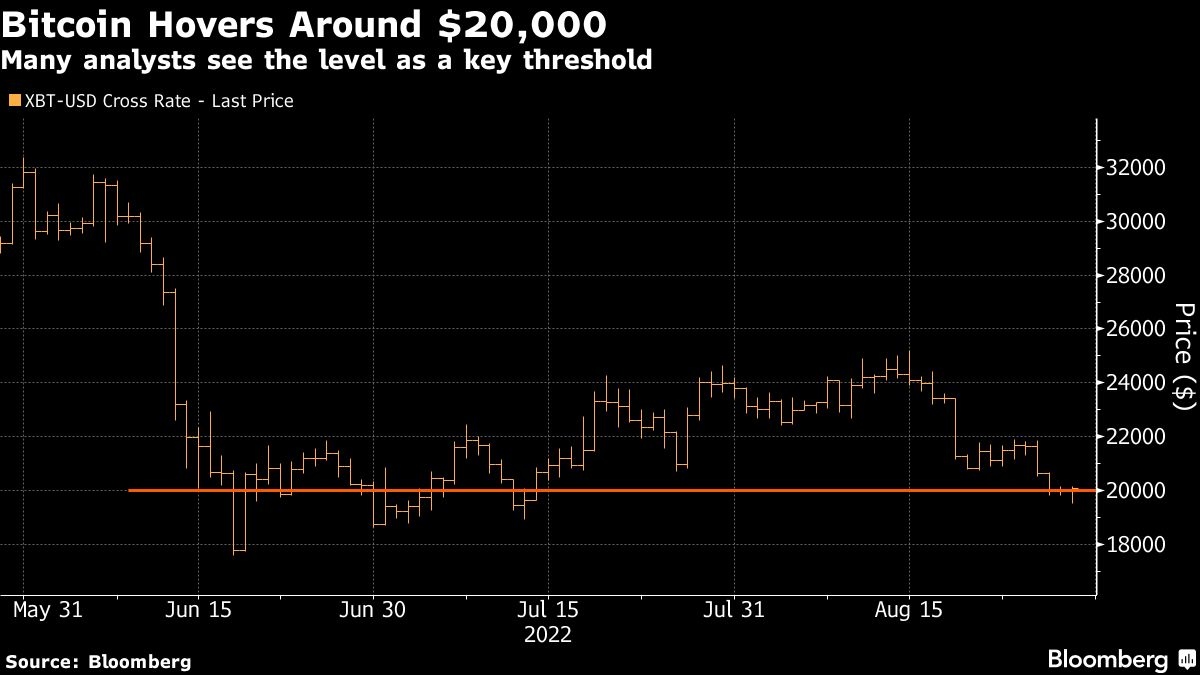 Riskier assets have been having a rough few days as traders digested comments from Fed Chair Powell, who reiterated that the central bank is willing to continue monetary tightening, even at the risk of an economic downturn.

Still, given that digital assets are closer to their 2022 lows than the stock market is, “the downside potential for stocks is actually more than for the cryptos right now,” said Matt Maley, chief market strategist at Miller Tabak & Co.

Numerous strategists have flagged US$20,000 as a key point for Bitcoin, though levels of support could lie lower as well.

Fairlead Strategies’ Katie Stockton sees long-term support in the US$18,300 to US$19,500 area. Fundstrat strategist Mark Newton has flagged some key areas in the US$19,000 range, with a “real area of importance” around US$17,500, near the June lows and which would allow for a 100 per cent alternate wave projection of the most recent decline from mid-August, he said in a note Friday.

With reports due this week on U.S. manufacturing and jobs that could influence central bankers’ policy decisions, “it could be another big week for crypto,” wrote Tammy Da Costa, an analyst for DailyFX, in a note Saturday. “In terms of technical analysis, a hold below US$21,000 and below the lower bound of the bearish flag at around US$20,300 could drive price action back towards the July low US$18,905 with the June low then coming into play at US$17,592.”

The past two Fridays have been tough in the crypto market, with US$288 million of crypto longs liquidated on the most recent one, according to data from Coinglass. On Aug. 19, US$562 million of longs were liquidated, the most since June 13.

Ether, the second-biggest token, slid as much as 4.1 per cent early Monday before recovering and then gaining 3.5 per cent to trade at US$1,530 -- still down from around US$2,000 a couple weeks ago. It has been fluctuating ahead of its much-anticipated Merge upgrade, which is due in mid-September.

“Ethereum’s drop ahead of the impending Merge is also of note as bearish sentiment appears to be taking hold across all so-called risk assets,” analysts at Bitfinex said in a note Friday. “The volatility that has become so characteristic of the digital token space shows no signs of abating.”