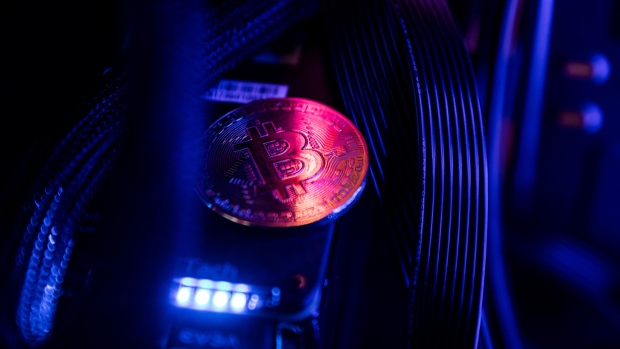 Bitcoin ended a banner year with a rocky finish.

The largest cryptocurrency by market value closed out December with a 19 per cent drop, its largest monthly loss since May. That was also its worst December since 2013. And its 60 per cent advance in 2021 marked its smallest gain for an up year since 2015, when it climbed 36 per cent. On Friday, the coin fell as much as 3.5 per cent before rebounding somewhat to trade at US$46,300 as of 5 p.m. in New York.

That Bitcoin had a breakout year, though, is now settled debate after the token and the wider crypto world spent 2021 pushing further into the mainstream and capturing more attention from finance professionals and the public at large. Those watching Bitcoin’s daily gyrations say all of it is par for the course -- the coin is famous for its volatility and this year proved just as choppy as any other. 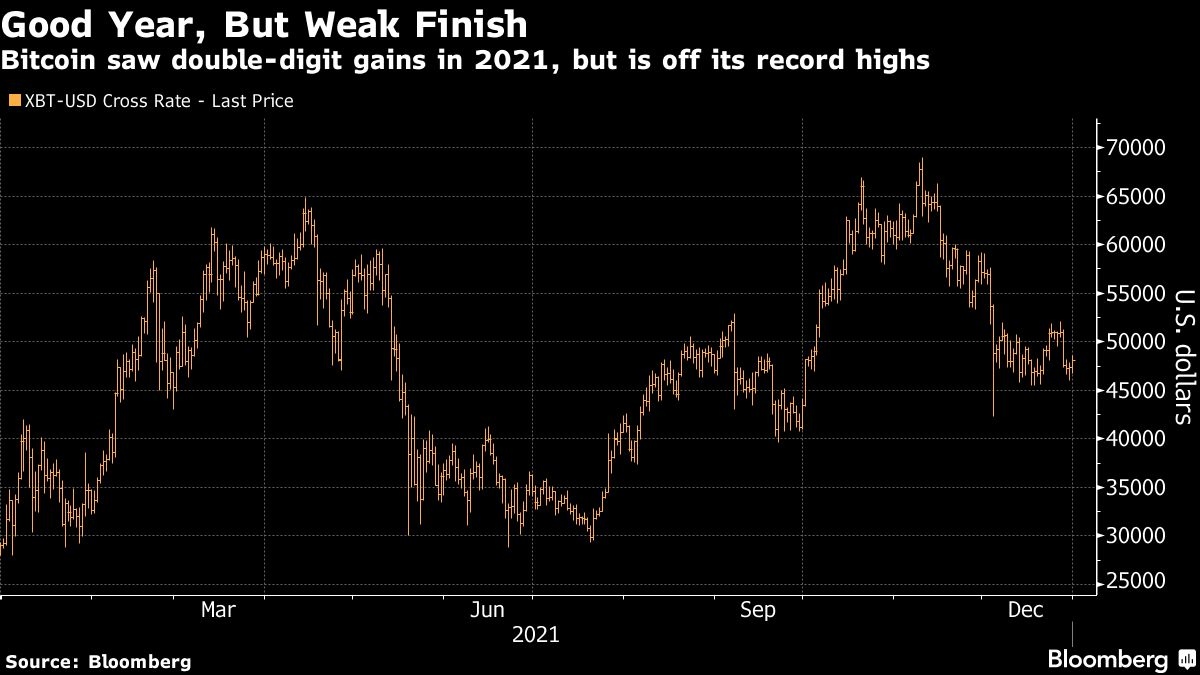 Bitcoin started 2021 with a bang, quickly notching new highs as more investors -- especially big-name Wall Street institutions -- became interested in it as a speculative asset or as a hedge against rising prices. Other positive developments, including the launch of the first U.S. exchange-traded fund tracking Bitcoin futures, also helped propel it higher over the year. Globally, more than US$20 billion was invested in crypto exchange-traded products through November, a record, according to ETFGI, a research and consultancy firm. Assets increased roughly 550 per cent year to date, up from US$3.1 billion at the end of last year, the firm said in a report.

“What lifted Bitcoin above US$20,000 was this excitement factor that, ‘Oh my God, it’s not just a bunch of kids. It’s real. Institutions are going to make strategic allocations in Bitcoin because it’s a limited supply, it’s only going to go higher,’” said Michael Purves, chief executive and founder of Tallbacken Capital Advisors. “The next stage of this sort of awkward adolescence of Bitcoin is going to require something more than that.”

Bitcoin has had a rough time since hitting an all-time high of near US$69,000 in early November. Partly, analysts say, it’s being buffeted by concerns over greater regulatory scrutiny around the world. But it’s also losing dominance to other lesser-known upstarts that have gained in popularity as the crypto ecosystem expanded this year. Among the biggest cryptocurrencies, Binance Coin posted the best return, adding roughly 1,300 per cent in 2021.

“Institutional investors like to pump up their large holdings at the end of the year and scale back (or in some cases, dump) their losers,” he wrote in a note this week. “Well, guess what? A lot of institutional players were late to the game on Bitcoin and other cryptos this year.”

Bitcoin’s gains for the year remain impressive, and it isn’t faring as poorly as it has during past drawdowns. Its 30 per cent drop from its high is not as drastic as other swoons it’s experienced. The average decline from a record sits at around 46 per cent, according Bespoke Investment Group. Bitcoin’s mid-year pullback was even worse, with the coin down more than 50 per cent at its low. 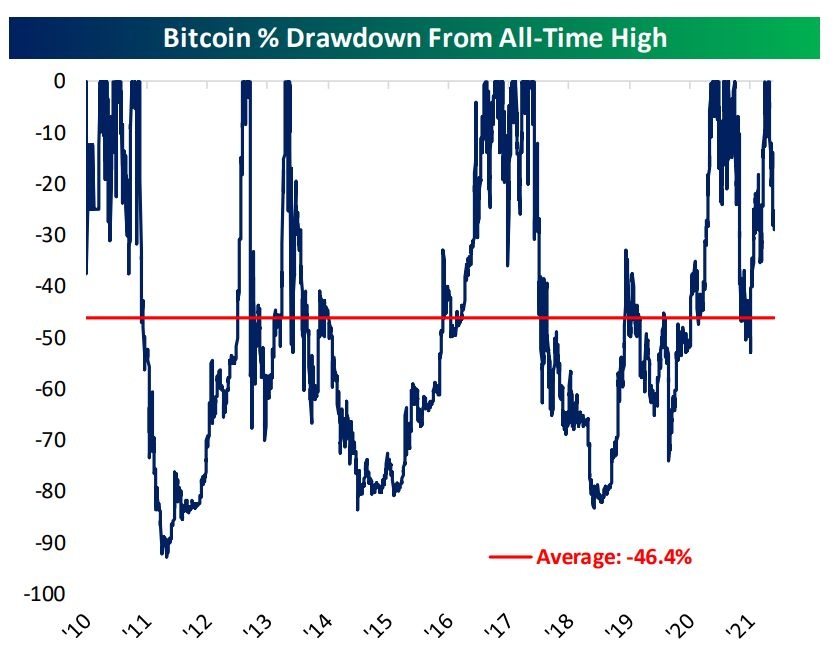 Looking ahead, many investors -- in classic “crypto-to-the-moon” fashion -- are expecting prices to recover and eventually reach new highs. The wild swings in the market suggest it could go either way.

“We expect Bitcoin to continue to perform well. Tailwinds include sustained inflation and broader investor adoption from continued education as well as the broader macro environment,” wrote Martin Gaspar and Katherine Webb at CrossTower Research. “Investors are increasingly understanding the unique value-add of Bitcoin. As long as it continues humming, we believe the price will follow.”