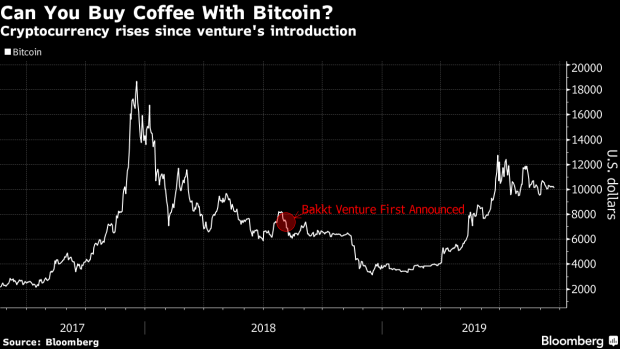 (Bloomberg) -- Bitcoin is growing up.

Monday marks the debut of futures contracts offered by Intercontinental Exchange Inc. that can result in delivery of the digital currency, a new chapter in Bitcoin’s tumultuous 10-year history. The first federally regulated market to buy and sell Bitcoin could entice conservative investors who have so far stayed on the sidelines to begin adding the digital asset to their portfolios, according to industry analysts. It also furthers efforts to create a market structure for financial professionals to take the digital asset seriously.

“The move to centralize and create a scalable infrastructure for crypto asset investment” is “a positive step,” said James Putra, head of product strategy at TradeStation Crypto. Because the ICE contracts will deliver actual Bitcoin, an investor can potentially profit first from the rise in the futures price and then take possession of the coins, he said. “I can capture both pieces and continue to ride that upward.”

Bitcoin has risen 177% this year, better than any other asset globally. The start of cash-settled futures contracts at CME Group Inc. in December 2017 helped send Bitcoin up 9% and coincided with its record price of $19,511.

It hasn’t been all smooth sailing for the ICE contract. The company faced a months-long delay after running into opposition from the Commodity Futures Trading Commission over how it proposed to store clients’ tokens to safeguard them from theft and manipulation, people familiar with the matter said earlier this year. To remedy this, the company sought a license from New York financial regulators permitting its Bakkt custody unit to hold customer tokens. That unit began operating earlier this month to give users a chance to become familiar with how it works.

“This contract is squarely designed for institutional participants,” said Adam White, chief operating officer of Bakkt. The combination of regulated trading with custody is what sets the ICE approach apart, he said. “That is of the utmost importance to institutions.”

The company is offering a daily contract as well as a 30-day future. The daily contract will be available for investors to buy or sell for 70 days into the future, while the monthly will be listed for 12 months out, he said. Both contracts can be rolled upon expiration, he said.

As for the delay ICE faced, White said “That was time well spent” because the company needed to address customer concerns about how their Bitcoin would be stored. “To us, it was not a race for speed but to get the right product out.” It’s rare in the futures industry for a market to act as an exchange for trading, a clearinghouse for settlement and a custodian for delivery. The last component is what necessitated Bakkt receiving the New York state trust license.

Completing the regulated custody “does add another layer of legitimacy to the market,” said Richard Johnson, an analyst at Greenwich Associates who specializes in blockchain technology. Bitcoin custody is risky because private keys are needed to move coins from one address to another. If a thief obtains that key he now controls that Bitcoin, Johnson said. There’s also the risk of losing the keys, he added.

The main competitor to the ICE Bitcoin futures will be the CME Group contracts. CME Group earlier this month said it will boost the number of contracts users can hold in the spot month and last week said it would begin options on its Bitcoin futures contracts in the first quarter next year, pending regulatory review.

“There’s room for both” CME and ICE contracts, TradeStation Crypto’s Putra said. A key for ICE will be devising a way for retail customers to easily buy and sell the futures, he said. Many retail brokerages aren’t set up to handle delivery of corn or cattle from a futures trade, so don’t allow those contracts on their systems, he said.

“People make mistakes,” he said. “It’s not easy to have a truckload of cattle to get to a customer.” The ICE daily contract could help firms that make short-term loans of Bitcoin, he said. Now they can hedge those loans, which tend to be one day in duration due to the wild volatility seen in Bitcoin’s price.

When ICE unveiled its Bitcoin futures plan in August 2018, it highlighted it in part as a way for merchants to adopt cryptocurrencies as a payment method. Its corporate partners include Starbucks Inc. and Microsoft Corp. Yet retail adoption of Bitcoin may still be a ways off, Putra said.

“It lays the groundwork to make it easier for other participants to adopt this,” he said of the ICE plan. Yet “it’s a lofty goal” to get corporations to begin changing Bitcoin into U.S. dollars. “It’s a bit of a leap to think Starbucks is going to manage its position through futures,” Putra said. “If I’m not managing my dollar or yen exposure with a futures contract, I’m not going to manage my Bitcoin exposure with a futures contract.”

White said the first hurdle for the company was to get enough traders using its Bitcoin futures. If they can pull that off, next year ICE plans to offer a product aimed at merchants, he said.

To contact the reporter on this story: Matthew Leising in Los Angeles at mleising@bloomberg.net