Three years ago, Bitcoin’s historic surge dominated Thanksgiving dinner conversations. This year, the cryptocurrency is in the midst of another notable rally and yet almost no one’s talking about it.

How fevered has Bitcoin’s latest leg higher been? With the coin trading around US$16,800, it’s been more expensive in only five other instances in the past decade, Bloomberg data show. All of those came during the 1,375 per cent surge in 2017 that saw it reach close to US$20,000 before a spectacular plunge wiped out 70 per cent over the next year. A cross above US$17,000 would mark its fifth-highest closing price ever. 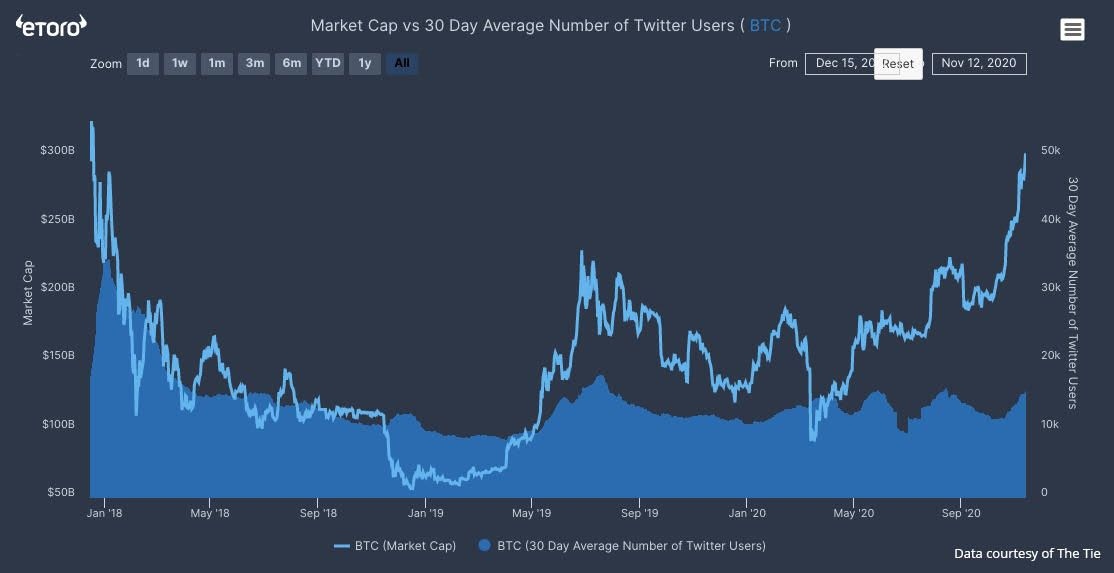 The world’s largest cryptocurrency by market value has been through a boom and bust and a second boom since its frenzied heydays in 2017. A lot has changed in the years since, and crypto enthusiasts argue digital coins have gone through a maturing process. But the mania that surrounded digital currencies back then is largely absent, despite Bitcoin being about 14 per cent shy of its vaunted record highs.

“The fascination with it has worn off. You have the hardcore ‘I’m a cryptocurrency investor’ group but it hasn’t really expanded because it’s been so volatile, there have been so many questions around security and what regulations might do,” said Kathy Jones, chief fixed income strategist for Schwab Center for Financial Research. “The number of questions I get on it now is a fraction of what I got a couple of years ago when it was really hot.”

By all accounts, Bitcoin has had a great year, despite a crash at the onset of the coronavirus pandemic that saw it lose 25 per cent in March. It’s more than doubled since December and many fans are once again eyeing the US$20,000 level as the next barrier to breach.

Developments in recent months have helped fuel this year’s rally. Fidelity Investments launched a Bitcoin fund, adding its star power and legacy brand to the space. Some prominent Wall Street names bought in. Public companies Square Inc. and MicroStrategy Inc. recently invested in the coin. And one of the most notable events for fans was PayPal Holding Inc.’s October decision to allow customers to access cryptocurrencies.

“It’s kind of in the shadows right now,” said Bryce Doty, portfolio manager at Sit Fixed Income Advisors. “Bitcoin gets attention when it looks like the world is coming to an end, it’s the anti-vaccine trade. As stocks and everything else have done better and people have forgotten about trade wars and things have been eclipsed by the pandemic, Bitcoin has taken a back seat to all of that.”

Matt Maley at Miller Tabak + Co. says institutional investors might be paying more attention to the crypto space -- he’s fielded some calls about it in recent weeks. But individual investors -- many of whom suffered through Bitcoin’s 2018 crash -- might have their sights set on other issues. This year has been a torturous and many are worried about the pandemic and the economic downturn, says the firm’s chief market strategist.

“The individuals -- a lot of those people got burned badly -- they’re less excited about it now,” he said. “It’s certainly not the huge hoopla we had back in 2017 -- that could change if it breaks above the 2017 highs.”

Guy Hirsch, managing director for U.S. at multi-asset brokerage eToro, is tracking a slightly non-traditional gauge of sentiment: the total number of Tweets that mention Bitcoin on a daily basis. At the height of the crypto boom, he was seeing around 120,000 Bitcoin-related tweets a day. That number now oscillates between 30,000 and 60,000, according to data from eToro and The Tie.

“This rally is clearly different in a number of ways,” Hirsch said by phone. It is less speculative, he said, and even though recent developments have been advancing at “a snail’s movement, it’s in the right direction. Generally speaking, we’re very bullish on what’s happening.”

Greg King, chief executive officer of Osprey Funds, a subsidiary of REX Shares that runs a Bitcoin trust, says the excitement’s there “but I think it’s a more grounded excitement.” He added: “The longer that Bitcoin persists and the more on-ramps that get built and the more that interest increases, I think it’s becoming more and more real in investor’s minds -- everyone has progressed three years further down the adoption curve.”

King says he’s not getting nearly as many inquiries from distant relatives about Bitcoin’s performance as he did a few years back. But he urges perspective: its price went from US$1,000 at the start of 2017 to more than US$19,000 later that year.

“Here, we haven’t even hit the previous high,” he said. “Yes, it’s back up to US$16,000 but people at the dinner table will be talking about it when it hits US$50,000 or US$100,000 -- then Thanksgiving will get very exciting and I’ll start hearing from those relatives again,” he said. “That’s when I think it really makes people’s radar.”