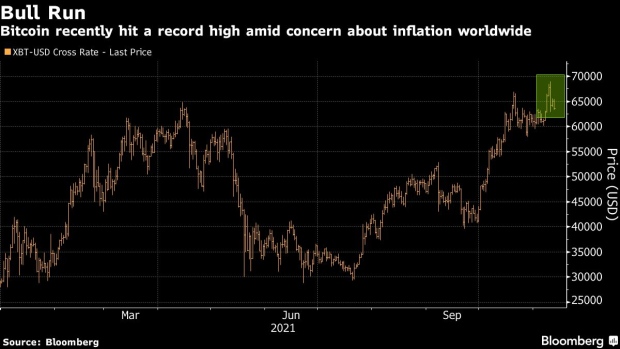 (Bloomberg) -- One of the most high-profile private equity investors in financial services says the largest digital asset by market value isn’t a suitable payment option.

“Bitcoin is really laughable as a serious alternative payment method,” J.C. Flowers founder Chris Flowers said at the last day of Berlin’s SuperReturn conference, where he was speaking about fintech valuations. “It’s too slow, too expensive.”

Bitcoin hit another record high this week, flirting with $69,000 for the first time, after inflation data bolstered the argument that the cryptocurrency is a hedge against rising cost pressures.

Flowers also criticized that theory, noting Bitcoin “really has essentially zero correlation with gold” and inflation isn’t a top priority for those who typically invest in digital assets.

“When is the last time you talked to a 25-year-old who said, ‘You know I am really worried about inflation,’” he said. “I don’t really think that is what is going on.”

One use case in transactions for Bitcoin would be markets where there is less stability and where transaction costs don’t matter such as Afghanistan or Venezuela, according to Flowers, whose firm has invested more than $16 billion into financial-services assets. U.K. asset manager Abrdn Plc is currently in talks with JC Flowers to purchase its Interactive Investors business.