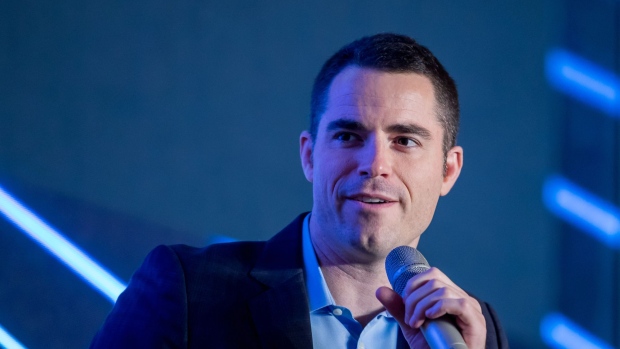 (Bloomberg) -- Bitcoin Jesus is back. After a year of social-media silence, Roger Ver -- who earned the moniker for his evangelical-like advocacy -- is the latest crypto pioneer to voice his support of Elon Musk’s takeover of Twitter.

Like many of the early cyberpunks and Libertarians who gravitated to Twitter while helping to popularize crypto, Ver said in an interview he’s optimistic Musk will end “censorship” on the social media platform. Coinbase Global Inc. Chief Executive Officer Brian Armstrong called Musk’s planned purchase “a great win for free speech.”

“It’ll certainly make Twitter more attractive,” said Ver, who has 742,000 followers on the site. “I am really, really grateful that Musk is out there calling out censorship.”

Even though he’s still often referred to by the nickname, Ver, 43, hasn’t been a supporter of the largest cryptocurrency for awhile because he says it deviated from its original purpose as an alternative currency. And he’s no fan of many of the current high-profile proponents such as MicroStrategy Inc. CEO Michael Saylor.

“He talks about how Bitcoin is encrypted packets -- it’s techno-bubble nonsense,” Ver said.

“Dogecoin is significantly better,” Ver said. “It’s cheaper and more reliable. If I had to pick three contenders [for the world’s dominant cryptocurrency], they would be Doge, Litecoin and Bitcoin Cash.”

The sentiments are a long ways off from where Ver started. After discovering Bitcoin in 2011, when it traded for less than $1, Ver would carry forth about the cryptocurrency at MeetUps and backyard barbecues, before moving on to conference stages when Bitcoin hit the big time.

He co-founded the startup now known as Blockchain.com, which in March raised funding that gave it a $14 billion valuation. He was an early investor in payment processor BitPay and crypto startup Ripple, he said.

When the Bitcoin network underwent a software upgrade he opposed in 2017, Ver switched allegiance to split-off version called Bitcoin Cash, which he has supported as true to the vision of Bitcoin’s anonymous creator, Satoshi Nakamoto. Nowadays, Ver holds a slew of coins including Ether, Monero, XRP, among others.

“I am definitely a cryptocurrency whale still,” he said. “I’ve always had a wide assorted basket in cryptocurrency. I was never a Bitcoin or Bitcoin Cash maximalist.”

Bitcoin Cash had underperformed Bitcoin, whose value has increased more than threefold since the split in late 2017. Bitcoin Cash has a market value of about $5.8 billion, compared with around $760 billion for Bitcoin, according to CoinMarketCap. Its value peaked right after the split and never recovered. It’s down by more than 80% since last May.

The U.S. native is now a citizen of St. Kitts and Nevis. His PassportsForCrypto.com website, which uses Bitcoin Cash, helps individuals apply for citizenship of the Caribbean country.

This month, Bitcoin.com ended a sale of a token called Verse to be used on Bitcoin.com site, with a second token sale to follow shortly. Ver expects the token to have a market value “into the billions” once it starts trading.