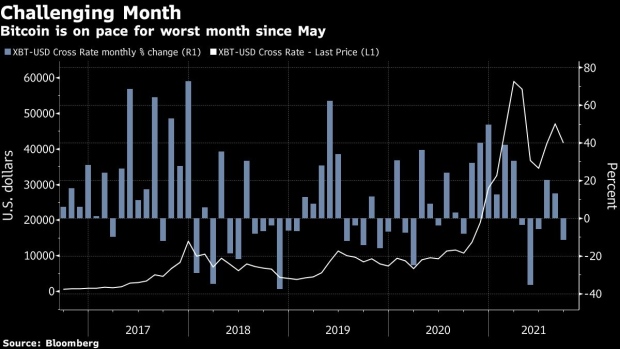 (Bloomberg) -- History suggested Bitcoin would have a rough September. That, once again, has turned out to be prescient.

The world’s largest coin slumped for a second day and is down almost 11% this month, on track for its worst monthly performance since May, when it experienced a swoon that knocked it off its steady upward momentum. It’s also its fifth consecutive negative September and its worst since 2019.

Meanwhile, U.S. stocks are also under pressure, with the S&P 500 on track for its worst month in a year. The coin’s 90-day correlation with the index has “increased considerably” during the latest risk-off period, according to a report from Arcane Research.

To Art Hogan, chief strategist at National Securities, that makes sense because Bitcoin tends to fall when other riskier assets decline as well.

“What’s going down now? All the high-flying, high-multiple riskier assets,” he said by phone. “And Bitcoin has to place itself in that neighborhood.”

Historically, the start of fall has been choppy for the world’s largest digital asset. In the past decade, September is the only month when Bitcoin has failed to deliver positive returns. The token fell during the calendar month in six of the previous 10 years, losing more than 6% on average, data compiled by Bloomberg show.

Bitcoin was hit on multiple fronts during the month, including a botched roll-out of the coin as legal tender in El Salvador and tightening of regulatory oversights in the U.S. and China. The developments have put pressure on other cryptocurrencies too -- the Bloomberg Galaxy Crypto Index, which tracks some of the largest digital coins, is down nearly 14% so far this month, also its worst monthly stretch since May.

“The news out of China has put a lid on Bitcoin near-term,” said Matt Maley, chief market strategist for Miller Tabak + Co. “Investors are starting to worry that more countries are going to put limits on cryptocurrencies.”

Still, October could see the tides turn. Six of the last 10 have been positive for Bitcoin, with average October gains of around 13%, Bloomberg data show.