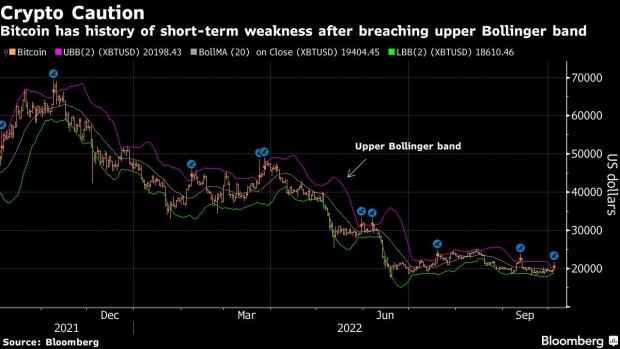 (Bloomberg) -- A climb in Bitcoin paused on Wednesday as a dip in US equity futures suggested a two-day surge in risk appetite is set for a breather.

The largest crypto shed about 1% and was trading near $20,160 as of 6:32 a.m. in London, following its biggest two-day increase in about a month. Ether, Cardano and Solana were also on the back foot.

Virtual coins rose along with other risk assets over the start of the week, buoyed by speculation that the peak of a global wave of monetary tightening is close. But high inflation has proved a stubborn foe and previous bouts of optimism have tended to fizzle in a bruising year for many investors.

A technical signal around Bitcoin, which has shed about 56% this year, sounded a note of caution. The signal comes from a Bollinger study, a popular way of analyzing volatility.

The token has breached its upper Bollinger band, and the previous times it did that in the past year, it fell an average of 12% over the next 20 days, according to data compiled by Bloomberg.

Dogecoin pared a rally sparked by Tesla Inc. Chief Executive Officer Elon Musk’s revival of his $44 billion bid for Twitter Inc. Musk is seen as a supporter of the token. The meme coin originally created as a joke in 2013 is up about 9% in the past 24 hours.