Bitcoin climbed to a record, taking less than three years to replicate the euphoric ascent that catapulted the cryptocurrency into the mainstream consciousness.

The world’s largest digital-asset gained 7.2 per cent to US$19,577.47 on Monday, pushing this year’s surge to more than 150 per cent, according to data compiled by Bloomberg. It traded at a few cents for several years after its late 2008 launch by an unknown software developer in the wake of the global financial crash.

“Bitcoin’s moment has arrived,” said Guy Hirsch, managing director for the U.S. at the trading platform eToro, who cited institutional involvement as one of the reasons for its recent advance. “This rally could still have quite a ways to go.”

For Bitcoin and its fans, it’s a momentous occasion in a decade-long life cycle marked by bouts of extreme volatility. The token hit a previous high of US$19,511 in December 2017 amid widespread elation, only to lose 70 per cent over the course of the following year.

In some ways, 2020 proved fertile grounds for Bitcoin’s comeback, with global central banks driving borrowing rates to record lows and providing extraordinary stimulus because of the Covid-19 pandemic.

Proponents have seized on the money-printing narrative to promote the notion that Bitcoin is a store of wealth even though inflation remains mostly muted. Still, prominent investors including Paul Tudor Jones said they’ve bought the cryptocurrency as a hedge against central bank and government actions.

Even with the latest price surge, the ownership of Bitcoin remains concentrated in the hands of a small number of investors who were some of the earliest adopters. About 2 per cent of the anonymous ownership accounts that can be tracked on the cryptocurrency’s blockchain control 95 per cent of the digital asset, according to researcher Flipside Crypto.

With the eye-popping gains, traditional financial firms have sought to capitalize on increasing institutional demand, with Fidelity Investments launching a Bitcoin fund earlier this year. PayPal Holdings Inc.’s decision in October to allow customers to use cryptocurrencies was seen as opening it up to an even wider audience.

“You now have numerous ways for institutional investors to get exposure to crypto using regulated exchanges or instruments they are comfortable with,” said Henri Arslanian, PwC Global Crypto Leader. “Most of these did not exist in 2017.”

Bitcoin remains highly volatile. It has posted an average daily move of 2.7 per cent this year, according to data compiled by Bloomberg. That compares with swings of 0.9 per cent for the price of gold, which is sometimes contrasted with digital assets and also hit a record in 2020.

That volatility was on display during the week encompassing the Thanksgiving holiday, during which the coin got within US$7 of its previous high only to lose US$3,000 within a two-day span.

Matt Maley, chief market strategist at Miller Tabak + Co., says it could reach as high as US$22,000 before it tops out for a while. Technical indicators show it’s gotten overbought, meaning it could soon pull back. Any drawdown could be swift but, he says, “it is very unlikely that it will be anywhere near as big as the 2018 decline.” 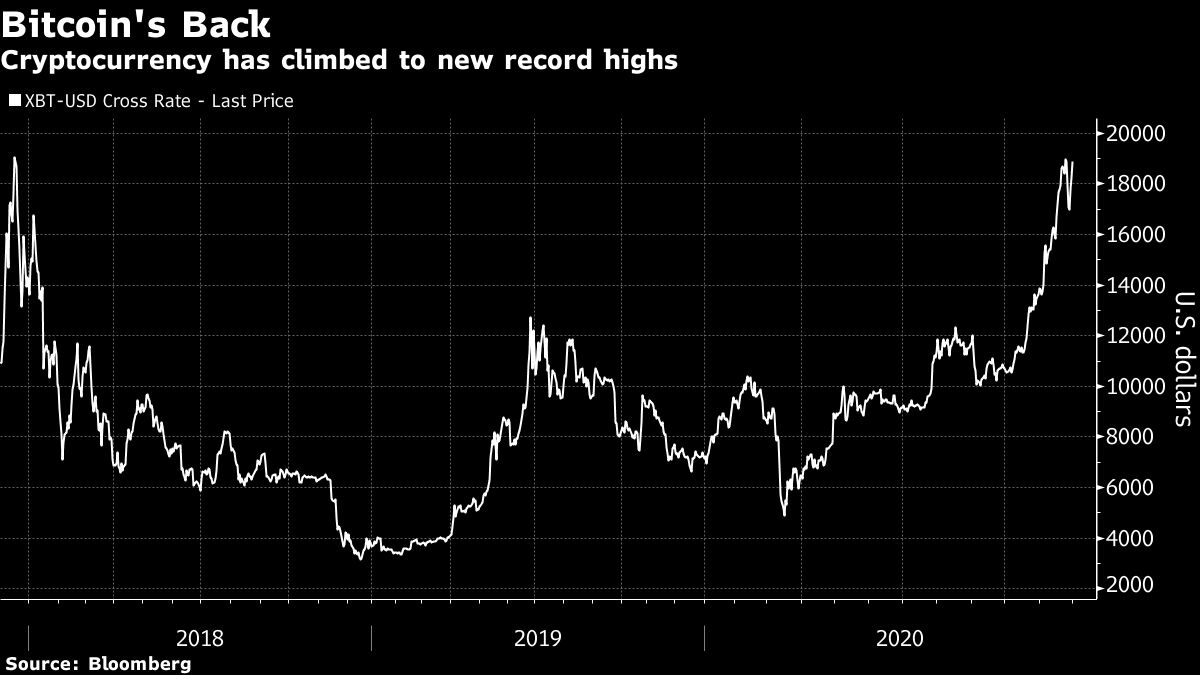