Bitcoin has proven itself to be the hardest store of value in human history: Hut 8 Mining CEO

Bitcoin’s rebound is making another rebuttal to those who expect the largest cryptocurrency will be overtaken by the meme-worthy heirs cropping up in droves.

While the original token was able to pare back its losses to just 11 per cent from 31 per cent Wednesday, its peer coins weren’t as lucky. Ether, Dogecoin and Binance Coin all remained down by at least 20 per cent in afternoon trading. That’s half of their earlier losses, but still double the damage compared to Bitcoin. For Bitcoin fans, the moves are yet another sign of its resiliency in the notoriously volatile market.

“If crypto was to crumble, BTC would be the last coin standing,” said Max Gokhman, head of asset allocation at Pacific Life Fund Advisors, referring to Bitcoin. “Hence players in the space will keep dumping other cryptos in favor of BTC even if it’s the subject of a negative narrative.” 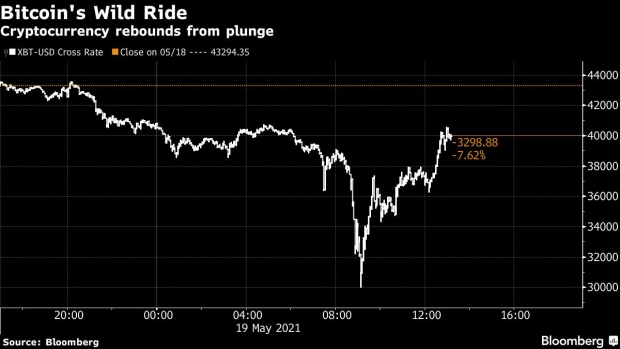 The partial rebound in Bitcoin came as many crypto fans -- known for their fierce conviction and chutzpah -- said they would be taking advantage of the dip.

Crypto-faithful Cathie Wood said she still sees Bitcoin reaching a price of US$500,000. Tesla Inc.’s Elon Musk tweeted the company has “diamond hands,” a popular day-trader phrase to mean holding strong. And Justin Sun, the founder of cryptocurrency platform Tron, said he bought roughly US$152,000,000 worth of Bitcoin at an average price of US$36,868 per coin.

“Bitcoin’s current price action is not abnormal for a bull market cycle,” and “prices could still resume their recent uptrend before forming a longer-term peak,” said Matt Weller, global head of market research at StoneX’s retail division Forex.com. “In other words, long-term bullish traders shouldn’t necessarily get out their coats and hats in preparation for a crypto ‘winter’ quite yet.”

Here’s what other market-watchers had to say:

Jaime Leverton, chief executive officer at Hut 8 Mining Corp., said in an interview with Bloomberg Television: “This volatility is something that you have to expect in a market that is still very, very early on and on the leading edge of innovation. I think people in the industry have come to make their peace with the volatility, albeit we’ve certainly had quite a ride over the last 24 hours.”

Meltem Demirors, chief strategy officer at CoinShares, said on Bloomberg TV: “We’ve seen this before, these cycles happen in crypto all the time.” She added: “What we’re seeing here is fear and panic, a lot of selling -- but most of the selling activity actually has been from recent entrants to the market.” “What we need to remember is in crypto, volatility is the price of the opportunity. We are going to see dramatic swings and corrections -- that is part of being allocated to the asset class,” she said.

Pacific Life Fund Advisors’s Gokhman said investors in cryptocurrencies -- seeing their rapid decline -- may have also felt the US$30,000 level in Bitcoin was a floor.

“It makes sense to see a bounce off that level. That’s a self-fulfilling prophecy as limit orders get placed around that support level often,” he said. “Plus if it gets below US$30k, then the freefall can accelerate, so there’s motivation to buy at that point to prevent further losses.”

Still, not everyone’s convinced the bounce-back will hold.

“I doubt Bitcoin is out of the woods just yet,” said Adam Phillips, managing director of portfolio strategy at EP Wealth Advisors. “Although Bitcoin is seeing growing interest among institutional investors, it remains mostly a faith-based investment. For now, concerns around energy consumption and regulatory scrutiny suggest that many are happy to watch this story play out from the sidelines.”