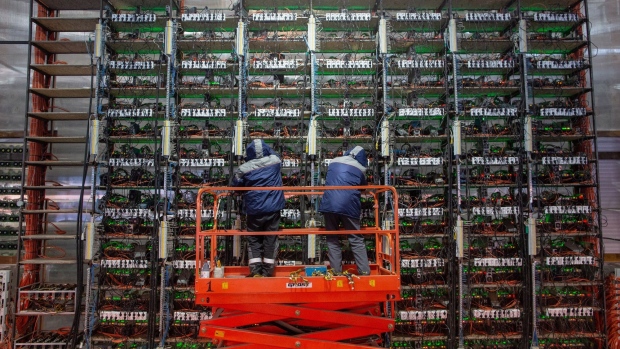 Engineers on a cherry picker adjust mining rigs at the CryptoUniverse cryptocurrency mining farm in Nadvoitsy, Russia, on Thursday, March 18, 2021. The rise of Bitcoin and other cryptocurrencies has prompted the greatest push yet among central banks to develop their own digital currencies. Photographer: Andrey Rudakov/Bloomberg , Bloomberg

(Bloomberg) -- US crypto miners would be forced to disclose greenhouse gas emissions under a new bill, adding pressure to a fast-growing industry criticized for its heavy toll on the environment and power grid.

The legislation, introduced by Democratic Senator Edward Markey, would require crypto miners using more than 5 megawatts of electricity — a threshold that most Bitcoin mining companies would pass —  to report emissions and the source of power, according to a copy of the bill shared with Bloomberg News. The US Environmental Protection Agency would conduct a study on the impact of existing and planned digital mining operations — including the level of stress on the energy grid and fossil fuel usage — and offer any measures state regulators can take to reduce their energy demand.

Mining digital currency is energy intensive, with companies including Riot Blockchain Inc. and Argo Blockchain often running thousands of specialized computers around the clock, solving equations that award crypto assets. About 60% of global currency mining is fueled by coal and natural gas, as opposed to renewable energy sources, according to data from Cambridge University’s Centre for Alternative Finance. US mining operations produce the equivalent greenhouse gas emissions of 7 million cars on the road for a year, according to a statement from Markey.

After China banned crypto mining last year, US operators raced to set up shop, now accounting for more than one-third of global Bitcoin mining operations, skyrocketing from just 3.5% in 2020. They gravitated to Texas for its business-friendly policies and cheap power, but the explosion of interest has raised concerns that the surge of new electricity demand will strain a power grid already plagued by widespread blackouts last year.

“Ensuring crypto mining companies report their greenhouse gas emissions is a necessary step toward holding them accountable and protecting communities across the country that rely on the grid,” Markey, chair of the Senate Environment and Public Works Subcommittee on Clean Air, Climate, and Nuclear Safety, said in a statement.

Earlier this year, Markey signed onto a letter from Senator Elizabeth Warren, a fellow Democrat from Massachusetts, asking miners to disclose years of power consumption and emissions, but the responses were limited.  The new bill from Markey, co-sponsored by fellow Democrats Representative Jared Huffman and Senator Jeff Merkley and endorsed by several sustainability-focused groups including the Sierra Club, would appropriate $5 million in 2023.

Markey is pushing for hearings in key committees on the issue, a spokesperson for the senator said.

"We would welcome legislation of this nature as long as the bill holds other industries to the same standard," Lee Bratcher, president of industry group Texas Blockchain Council, said in a statement. The group disputed that digital currency mining takes up an outsize amount of energy.

(Updates with comments in the last two paragraphs.)