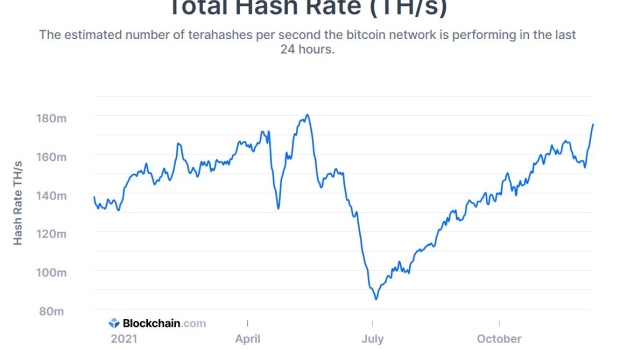 Bitcoin mining machines at a Canada Computational Unlimited Inc. computation center in Joliette, Quebec, Canada, on Friday, Sept. 10, 2021. CCU.ai, a Bitcoin mining center powered by hydroelectricity, has been conditionally approved for trading on the TSX Venture Exchange in Toronto under the stock symbol SATO. , Bloomberg

The Bitcoin network is close to a complete recovery from the drop prompted by China’s crackdown on the cryptocurrency industry earlier this year.

The hash rate, which measures the computing power being put toward mining and processing transactions, peaked at around 180 million terahashes per second on May 14, according to data from Blockchain.com. It fell to 86 million as of July 4, as China -- which had previously been by far the biggest source of mining power -- basically banned the practice and miners were forced to pull up stakes. As of Wednesday, it was back up to 176 million.

Bitcoin mining takes a lot of energy, though estimates vary widely as to exactly how much it’s using and what kind of environmental impact it may be having. Due to China’s crackdown, it’s estimated that about 50% of the world’s mining rigs went offline nearly overnight, according to a Nov. 8 report from BTIG LLC, which added that the move had given countries like Canada and the U.S. a chance to help fill the gaps. The likes of Texas and Miami have been welcoming transplants.

“Unlike traditional data centers that require multiple redundancies to avoid going offline, one of the biggest advantages of a Bitcoin mining data center is its flexibility and the ease in which it can unplug and plug back into the grid, which makes crypto mining a power load balancer for nuclear and renewables facilities that want to avoid shutting down during periods of weak demand,” the BTIG analysts led by Gregory Lewis said in the report.