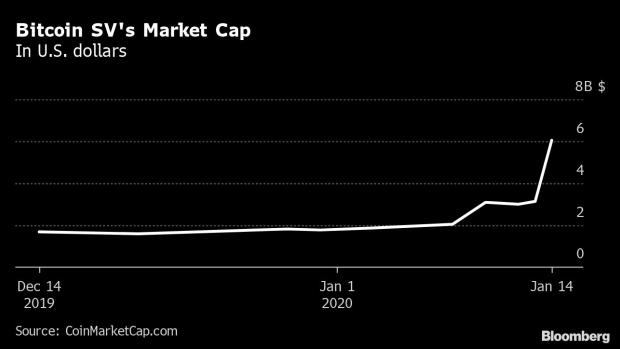 (Bloomberg) -- Bitcoin SV more than doubled in value, continuing its surge in the wake of a ruling that may benefit the self-proclaimed inventor of Bitcoin.

A judge in the U.S. District Court in West Palm Beach, Florida, said on Jan. 10 that Craig Wright, who claims he created Bitcoin under the pseudonym Satoshi Nakamoto, can postpone a deposition that was scheduled for Tuesday, and receive additional time to produce information about his Bitcoin holdings. The case could shed light on whether Wright actually owns a huge swath of the original coin.

If his identity as Nakamoto is confirmed by the case, that could give a boost to Bitcoin SV, a rival effort that Wright has been supporting for months, after claiming that the original Bitcoin didn’t pan out as he’d hoped.

Judge Beth Bloom also reversed some sanctions imposed on Wright by another judge.

The estate of former business partner Dave Kleiman is suing Wright for Bitcoins worth billions. The outcome of the case could potentially impact the markets for both Bitcoin and its offshoots, like Bitcoin SV.

In August, a judge ruled that Wright submitted false documents and lied in the legal dispute with the Kleiman estate, ordering him to surrender more than $4 billion of the cryptocurrency.

While many people in the cryptocurrency community doubt Wright’s claims, more than $5 billion in Bitcoin SV, or Satoshi’s Vision, traded over the last 24 hours, according to CoinMarketCap.com. The coin, trading at about $330, is the now the fifth largest by market value, the data tracker said.