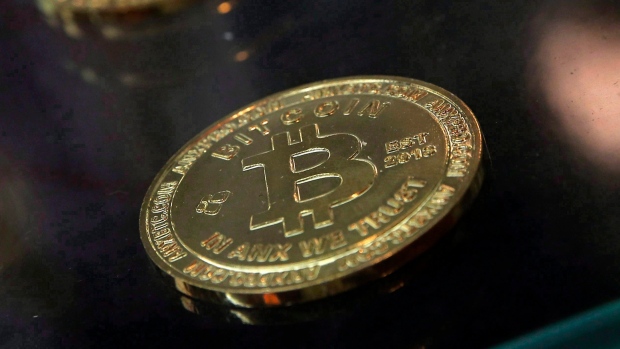 In this Friday, Dec. 8, 2017, photo, coins are displayed next to a Bitcoin ATM in Hong Kong. The Canadian Press/AP/Kin Cheung

Bitcoin’s recent run higher has brought out a lot of old predictions -- and some new ones -- about the future of crypto prices.

The largest cryptocurrency has had quite a 2020, where after dipping below US$4,000 it’s marched higher and is now bouncing around US$12,000. It’s seen further acceptance in the mainstream investment community, experienced a “halving” where the rate of Bitcoin created dropped by 50 per cent as of May, and seen correlations with gold rise to records.

The environment has changed significantly since Bitcoin’s big 2017 runup -- and the comedown and “crypto winter” that followed. The digital-asset community tends toward Bitcoin bullishness at pretty much any time, but there are indications the increase might be more sustainable this time around with advocates pointing out the advantages of an alternative form of money while governments ramp up stimulus in the wake of the coronavirus pandemic.

First of all, there’s the rising demand from some of the biggest market players. 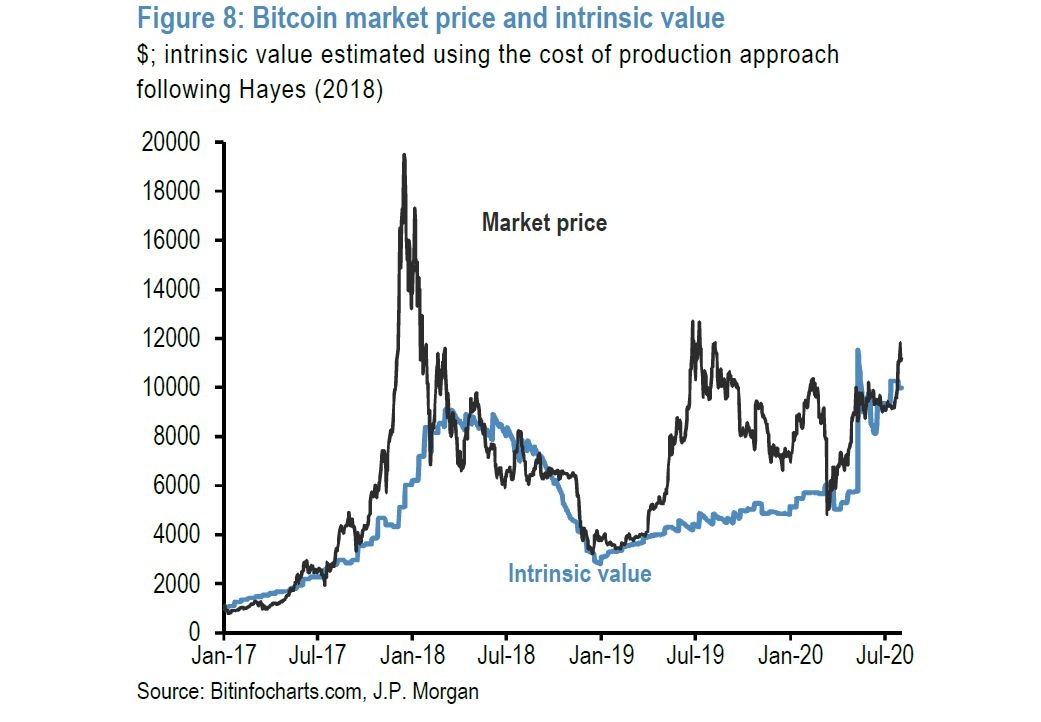 Then there’s the halving. JPMorgan Chase & Co. says Bitcoin’s intrinsic value -- which it calculates using a cost-of-production approach -- has jumped because of it. While the market price was above the JPMorgan intrinsic value estimate through much of 2019 and early 2020, the two measures had been fairly close together until a recent upward move by Bitcoin.

“Much of the gap between the market price and intrinsic value was closed by a decline in the latter as miners responded with a combination of a decreased overall hash rate and improvement in efficiency, likely as less efficient rigs were turned off,” JPMorgan strategist Nikolaos Panigirtzoglou wrote in a note Aug. 4. “More recently, the increase in the market price appears to have taken it from trading at around a 10 per cent discount of production cost to a premium of a similar magnitude.”

And Bloomberg Intelligence’s Mike McGlone looked at price behavior around the last halving to project potential gains for Bitcoin. He said in a report earlier this month that this year should see Bitcoin touch the US$14,000 area, around last year’s highs. But he thinks there’s potential for even more.

“Bitcoin is mirroring the 2016 return to its previous peak,” McGlone said in early June. “That was the last time supply was halved, and the third year after a significant peak,” he said. “Bitcoin will approach the record high of about US$20,000 this year, in our view, if it follows 2016’s trend.”

Then there’s the demographic trend. JPMorgan’s Panigirtzoglou also said Millennials are supporting Bitcoin, which the cohort sees as an “alternative” currency the way older investors view gold. That generational support has been a longtime theme for Fundstrat Global Advisors LLC’s Tom Lee, who noted in a January report that the group is set to inherit US$68 trillion in the next 20 years.

Lee is a longtime Bitcoin bull who sees multiple reasons the cryptocurrency can move higher -- potentially exponentially. If crypto wallets climb to 50 per cent of Visa by 2030, the implied price of Bitcoin would be US$20 million, he said in the same report -- though he emphasized that’s a projection, not a forecast.

It’s also impossible to ignore the volatility and risk inherent in cryptocurrency investments. Big upward moves are often accompanied by downward ones, on both a short-term and long-term basis. A small number of investors, so-called Bitcoin whales, control a majority of Bitcoin and can have outsized effects on the price. Security is an issue, with theft possible and movement of the asset hard to trace -- one reason it’s become a favored vehicle for illicit ransom demands.

But if you’re looking for reasons to believe in the gains, consider the focus of JST Capital’s Louis Curran: China. He noted that Mu Changyun, the director of the People’s Bank of China’s Digital Currency Research Institute, said China had been so concerned about Bitcoin in the 2014-2017 time period that it feared for the sovereignty of the yuan.

Curran said that China countered this by starting work on the digital yuan and, he believes, capping the price of Bitcoin -- though he said it’s very difficult to tell when China is acting in markets. Now that China has made progress toward the digital currency, he sees Beijing as less worried about Bitcoin.

“Bitcoin has its best opportunity to move higher in the present environment because the Chinese aren’t as fearful as they were in the past,” said Curran, who is based in Singapore. “Now we’re starting to see the yuan strong on its own fundamentals so there’s less incentive to cap Bitcoin.”