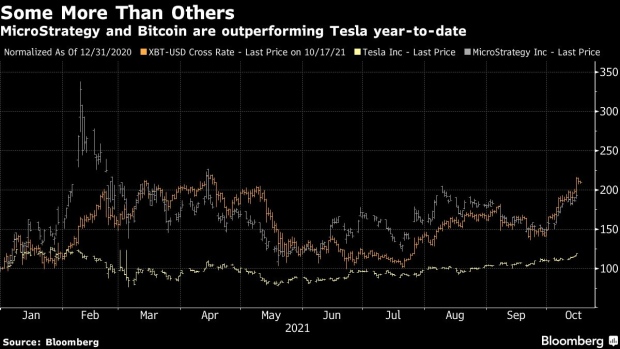 A sits on the steering wheel of a Tesla Inc. Model 3 electric vehicle in the Tesla store in Barcelona, Spain, on Thursday, July 11, 2019. Tesla is poised to increase production at its California car plant and is back in hiring mode, according to an internal email sent days after the company wrapped up a record quarter of deliveries. Photographer: Angel Garcia/Bloomberg , Bloomberg

(Bloomberg) -- A divergence in options metrics between Bitcoin-linked Tesla Inc. and MicroStrategy Inc. may present opportunity, according to RBC Capital Markets.

Both stocks are up at a time when Bitcoin has gained due to optimism about approval of a U.S. exchange-traded fund, RBC derivatives strategist Amy Wu Silverman wrote in a note Saturday. However, the skew measuring the cost of bearish options versus bullish ones is inverted for MicroStrategy while Tesla is at highs, she said.

“Frankly, it shocks me anytime Tesla skew isn’t inverted,” Silverman wrote. “However, it does present an opportunity to bet on a skew inversion by selling expensive Tesla puts for out-of-the-money Tesla calls.”

She suggested a risk-reversal trade that involves selling Tesla $700 puts expiring in December and buying $930 calls.

Bitcoin has had a volatile year so far but is about double where it started, and closing in on its record high near $65,000 from April. Numerous digital-asset-related stocks tend to move in the same direction as the largest cryptocurrency.

MicroStrategy in particular fits that bill, with its Chief Executive Officer Michael Saylor an outspoken crypto bull who regularly uses corporate cash to buy Bitcoin. Tesla holds some Bitcoin on its balance sheet but is far less linked to the crypto for its corporate fate.

Silverman noted that Tesla’s earnings are due soon, which is likely a factor in the options bets as well.