Bitcoin ownership significantly increased among Canadians last year, according to a survey released by the Bank of Canada.

In the central bank’s 2021 Bitcoin Omnibus Survey, it found ownership levels increased to 13 per cent in 2021.

The number of Canadians who owned Bitcoin sat at five per cent between 2018 and 2020. 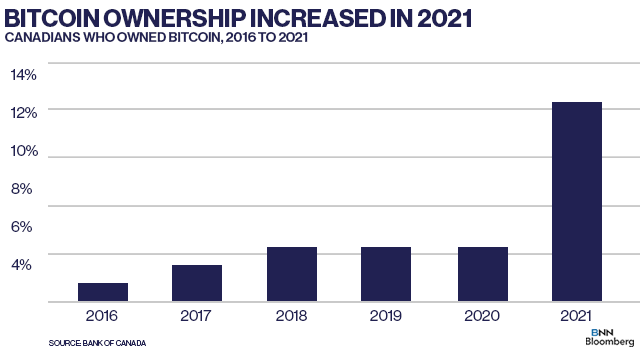 “This increase occurred following widespread increases in the savings and wealth of Canadians during the pandemic,” the BoC report states.

“At the same time, some fintech companies began to offer cryptocurrencies alongside traditional investment products, providing consumers with a wider range of accessible and user-friendly platforms to buy Bitcoin.”

Bitcoin ownership increased the most among men (19 per cent) compared with women (seven per cent.)

The survey also found younger Canadians are more likely to be Bitcoin owners, with 26 per cent of Canadians 18 to 34 investing in the digital asset in 2021.

The majority of Bitcoin owners have a smaller stake in the digital asset.

Many Canadian Bitcoin owners have suffered a significant investment loss at some point.

The report found 25 per cent of Bitcoin owners had lost a large amount in a price crash, which is up from 18 per cent in 2019.

Since then, the cryptocurrency has fallen more than 28 per cent to trade at $19,096.57 as of mid-day Wednesday.

Canadians also said that they’ve reported other issues with their crypto assets such as losing access to their wallet (11 per cent), transaction problems (nine per cent) or stolen funds (seven per cent.)