Bitcoin surpassed US$19,000 for the first time since 2017 as the mania over digital currencies continues to grip Wall Street.

Bitcoin climbed as much as 5.5 per cent to trade at US$19,438 before paring the advance. Prices are approaching the all-time high of US$19,511, according to Bloomberg data, with many pointing to the wider acceptance of cryptocurrencies among traditional investors as the catalyst behind the surge.

“Momentum is clearly with the bulls as Bitcoin surges past US$19,000,” said Denis Vinokourov, head of research at Bequant, a London-based digital asset firm. “Given how prone to volatility digital assets can be, and the ever-increasing amount of liquidity from what is clearly becoming a FOMO trade on all sides, we can almost be certain there will not be an immediate selloff like back in 2017.”

Bitcoin has advanced more than 160 per cent in 2020 amid wider institutional acceptance and greater interest among mainstream firms. PayPal Holding Inc.’s October decision to allow customers to access cryptocurrencies led the coin to spike above US$13,000 for the first time in over a year. And Fidelity Investments launched a Bitcoin fund over the summer. 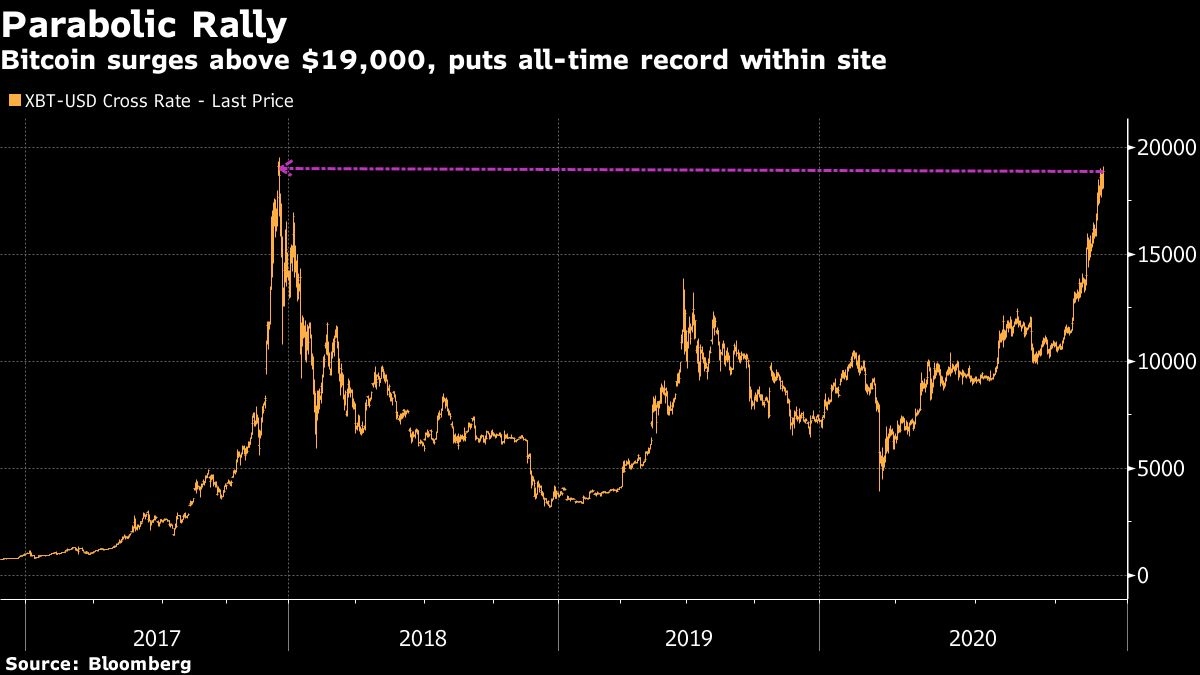 The coin’s next level of resistance is at US$20,000, and it would need to trade above that mark for a sustained period of time before clocking further gains. Still, the recent rally has pushed its 14-day Relative Strength Index (RSI) above 80, meaning the token is overbought. The gauge measures the magnitude and persistence of price movement and assets are considered overbought if the RSI exceeds 70.

Bitcoin’s revival has ushered in a slew of sky-high predictions from celebrity crypto fund-managers to Wall Street stalwarts of where it can go next. Outside of the eternal to the “moon” pronouncements from Twitter pundits, forecasts vary from US$25,000 to more than US$300,000 by the end of next year.

“It’s been a one-sided trade -- it’s been remarkable, frankly, to look at,” said Keith Buchanan, portfolio manager at Globalt Investments. “If you’re not paying attention to it, you’re kind of out of the loop.”