McCreath: Be careful of roll-up stocks, their best days are over

A fresh bout of selling on Friday drove Bitcoin down as much as 7.9 per cent to US$47,525 -- below its 100-day moving average -- as it continued to take out key technical levels. Wall Street analysts warn of further losses for the notoriously volatile currency that hit a record high of US$64,870 on April 14 ahead of Coinbase Global Inc.’s listing, before succumbing to an unexplained weekend swoon.

This week’s roughly 20 per cent rout marks the worst period for Bitcoin since it tumbled amid a wider slump in risk assets at the end of February. Even digital currencies that have managed to eke out gains over the past few days, like Ether and the satirical Dogecoin, tumbled on Friday as the crypto space turned into a sea of red.

“Bitcoin has slipped below the 50-day moving average support that it held sacrosanct through this rally,” said Pankaj Balani, CEO of Delta Exchange. “It looks like there is more downside here.” 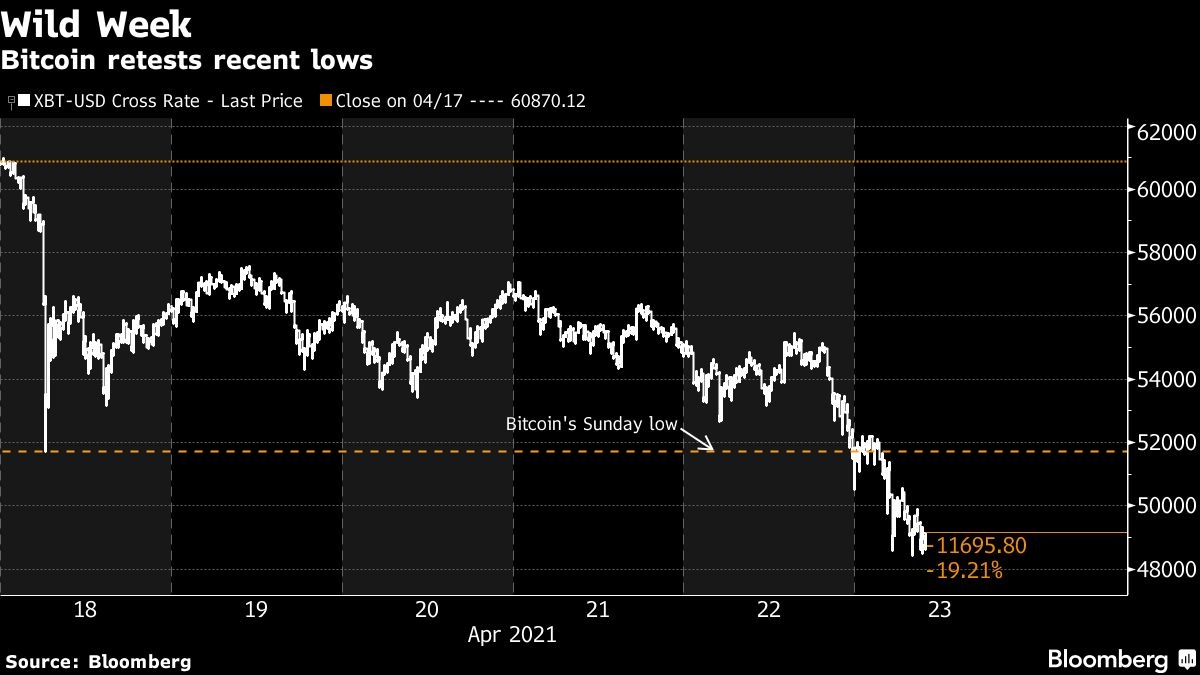 The latest threat comes from a Bloomberg News report Thursday that the Biden administration is considering raising the tax on capital gains to 39.6 per cent for those earning more than US$1 million a year. That was enough to ignite the biggest slide in U.S. stocks in five weeks. U.S. investors in Bitcoin, which has advanced more than 70 per cent this year despite its recent pullback, already face a capital gains tax if they sell the cryptocurrency after holding it for more than a year.

But the coin’s been one of the best-performing assets in recent years -- anyone who bought a year ago is sitting on a nearly 550 per cent gain. For investors who bought in April 2019, it’s roughly 800 per cent.

Bitcoin correcting below US$50,000 is doing what we see as normal for bull-markets as it flushes excesses and probes for support. The traders’ adage “If it seems easy, something’s wrong” appears to be playing out, with some key bullish underpinnings in place: Ethereum is above its US$2,000 threshold and the launch of U.S. crypto ETFs appear imminent.

To be sure, the proposal will have to wind its way through Congress and even if it’s passed, investors don’t yet know when it would go into effect, said Simon Peters, crypto-asset analyst at multi-asset investment platform eToro.

But, “we are clearly seeing some selling pressure,” said Peters. “This has coincided with the crypto market arguably looking quite frothy after a ramp up in purchases -- and prices -- in recent months, with this announcement acting as a catalyst for a deeper retracement.”

The IRS has stepped up enforcement of tax collection on crypto sales. The agency -- which began asking crypto users to disclose transactions on their 2019 individual tax returns -- asks taxpayers whether they “received, sold, sent, exchanged or otherwise acquired any financial interest in any digital currency.”

Bitcoin broke below its 100-day moving average earlier Friday. For many chartists, its next support level is around its 150-day line, followed by its longer-term 200-day one around US$34,520. But, some might be heartened by the fact that its relative strength indicator is nearing an oversold level (it’s currently at 30.5), meaning that Bitcoin could see a reprieve from the selling. 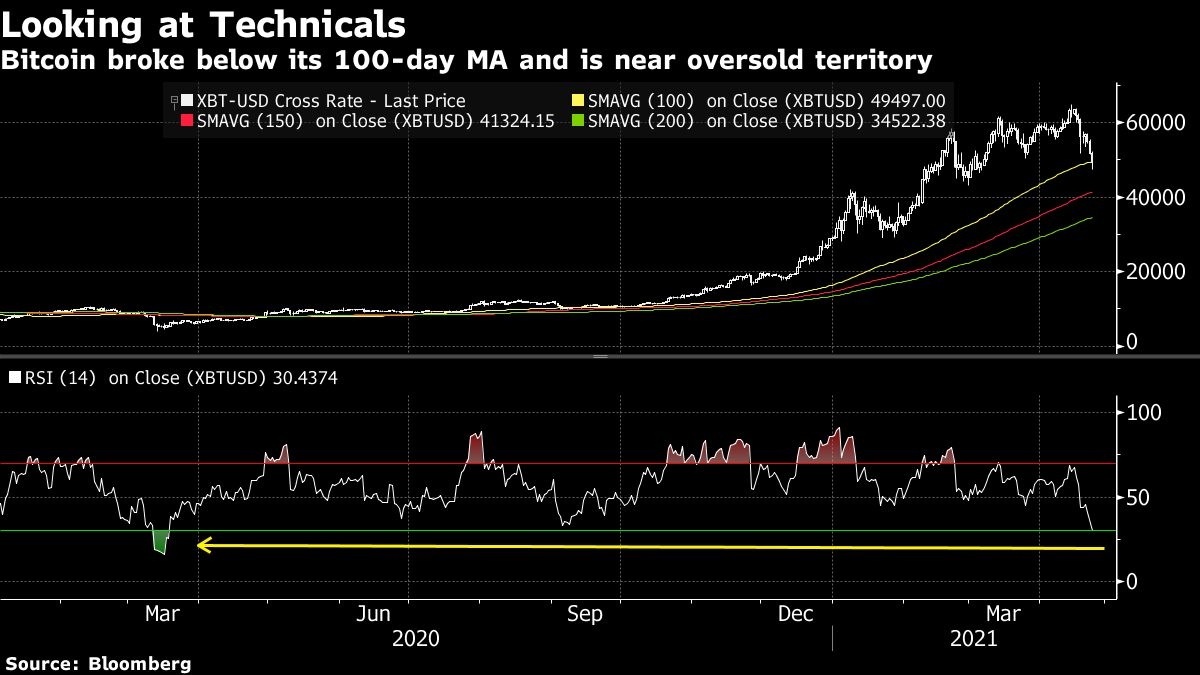 Carter Worth at Cornerstone Macro said his analysis points to Bitcoin falling to US$40,000. That could happen if it breaks below the trend line that’s been in effect the past six months. The level corresponds to Bitcoin’s 150-day moving average and has showed significance during this year’s trading -- it posed resistance in January while offering support in late February.

Still, investors may need to buckle up for more volatility in the near-term.

“People have been talking about the capital gains tax and U.S. stock-market selloff being the catalyst of this,” said Todd Morakis, co-founder of digital-finance product and service provider JST Capital. “If it is true we’ve moved too much -- but once Bitcoin gets a head of steam it is tough to stop unless you are at a technical area.”

--With assistance from Kenneth Sexton, Anchalee Worrachate and Lu Wang.