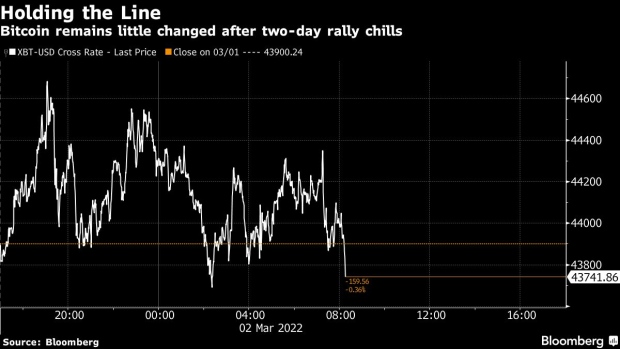 (Bloomberg) -- Bitcoin edged marginally higher after rallying more than 16% over the past two days as government officials raised the possibility of expanding sanctions to prevent Russians from using cryptocurrencies to circumvent restrictions.

The largest digital asset by market value gained less than 2% to $44,300 as of 10:12 a.m. in New York. Ether rose a similar amount, while many altcoins trended lower.

After plunging at the onset of the Russian attack on Ukraine, cryptocurrencies had reasserted themselves as haven assets in recent days, while also emerging as a potential vehicle for getting around sanctions. Members of the European Union and the Group of Seven are now working to block Russians from using digital assets to evade monetary sanctions, German Finance Minister Christian Lindner said during a televised interview Wednesday.

Noelle Acheson, head of markets insights at Genesis Global Trading Inc., said the kind of large cryptocurrency transactions sanction evaders would be expected to use are relatively easy to track, noting that on-ramps or off-ramps can be held accountable.

The outperformance by cryptocurrencies compared with stocks and broader market measures had some analysts pointing to a break from the narrative that crypto is just a risk-on asset.

Bitcoin volume growth is often correlated with political instability, according to James Butterfill, head of research at CoinShares. Trading volume in Bitcoin using the ruble have surged to the highest level since May, suggesting Russians are potentially moving their money into crypto as the Russian currency plunges to a record low.