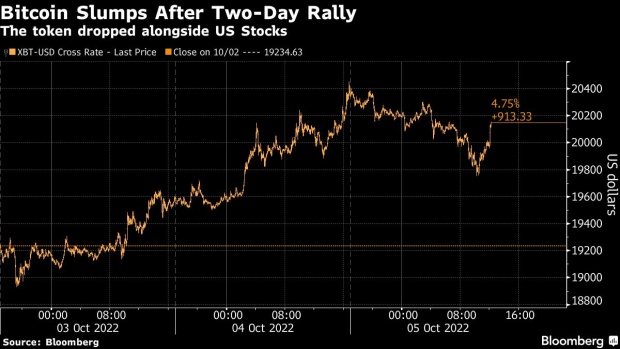 A Bitcoin token on top of U.S. dollars arranged in Montreal, Quebec, Canada, on Wednesday, March 2, 2022. Bitcoin was little changed after rallying more than 16% over the past two days as the possibility of expanding sanctions was raised to prevent Russians from using cryptocurrencies to circumvent restrictions. , Bloomberg

Bitcoin, the largest digital coin by market value, dipped as much as 2.9% on Wednesday to trade as low as $19,752, before trading little changed. That’s a reversal from the prior day’s trading, when Bitcoin moved above $20,000 to gain alongside the S&P 500 Index. US stocks also slumped on Wednesday, dropping as much as 1.8% after a two-day rally.

Ether sank as much as 3.3%, while other so-called altcoins like Cardano and Solana dipped lower. Dogecoin sank as much as 3.8%, a reversal from the prior session when the coin gain as much as 9.5%. Tesla CEO Elon Musk, an ardent supporter of the token, revived his $44 billion bid for Twitter Inc. on Tuesday.

Economic data showed better-than-estimated growth for US service providers as well as companies’ strong demand for workers. Those figures could weigh on investors’ hopes for a more dovish Federal Reserve.

Stephane Ouellette, chief executive of FRNT Financial Inc, a crypto brokerage firm, said that even though Bitcoin and the S&P 500 are both declining, Bitcoin’s move is relatively more muted.

“Typically BTC volatility is at least 3-4x higher than SPX volatility,” Ouellette wrote to Bloomberg News. Bitcoin’s drop is “the equivalent of a much smaller move in equities,” he added.