Not surprising if we end the year with Bitcoin through 100,000: BlockTower Capital's Bucella

Bitcoin surged to its highest levels since mid-April after surpassing a closely-watched technical hurdle.

The digital token climbed above its average price over the past 50 days, a measure of its short-term momentum. For chart watchers, that had been an important level -- such a move usually portends further gains. Many analysts will now look to see if it can sustainably stay above it. 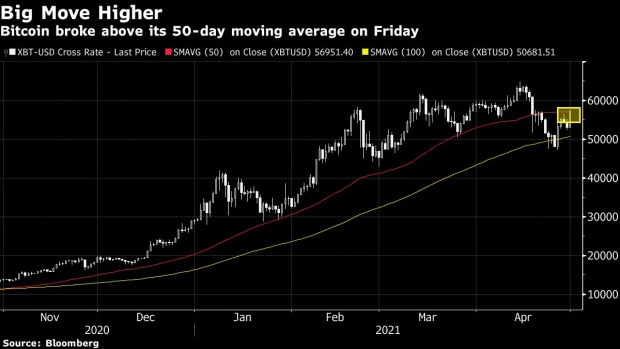 Trading in the world’s largest digital asset has been choppy in recent weeks after it hit a record high in mid-April above US$64,000. It’s come down since then amid sessions that have clocked large intraday swings. On Friday, Bitcoin was up about 7.6 per cent to US$57,006 as of 12:29 p.m. in New York.

But despite recent turbulence, interest in cryptocurrencies has skyrocketed amid Bitcoin’s trek to all-time highs. A growing number of traditional Wall Street firms have warmed to it and it’s received endorsements from celebrities like Elon Musk. Assets in digital-asset products listed globally, including ETFs and ETPs, reached US$9 billion at the end of the first quarter, a record high, according to ETFGI.

“If you make an investment today or you make an investment in early December, like we did, you have to expect multiple 20 per cent to 30 per cent pullbacks in the bull-market phase,” Troy Gayeski of Skybridge Capital said this week on Bloomberg TV. “But that being said, I mean, the combination of extraordinary supply growth, we still think we’re in the early innings of the adoption cycle.”

Mike McGlone of Bloomberg Intelligence agrees that adoption is in its early days and says Bitcoin appears to be the right fit for today’s rapidly changing digital world. He sees catalysts that could take it to US$100,000.

“Diminishing supply juxtaposed with historically low interest rates and the substantial amount of money being pumped into the system is a solid foundation for Bitcoin price appreciation, if the rules of economics apply,” he wrote in a note.