Bitcoin might be back above US$9,000 again but technical indicators show its next leg higher might be harder to come by.

The largest digital token, coming off its historic and highly-hyped halving event, hasn’t been able to sustain a rally above US$10,000, a resistance level that dates back to October. It broke through during Thursday’s trading session but swiftly retraced the gains.

In addition, the MACD — or the moving average convergence divergence gauge — shows the smallest positive divergence since Bitcoin’s uptrend began, suggesting bulls would need strong support to breach US$10,000.

“I don’t think the fight will end there — a break of [US]$10,000 would be very bullish for the cryptocurrency and we’ve all seen what that can lead to,” Craig Erlam, senior market analyst at Oanda, wrote in a note. “The previous peak around [US]$10,500 may provide some resistance above, but the next real test will be [US]$11,000.” 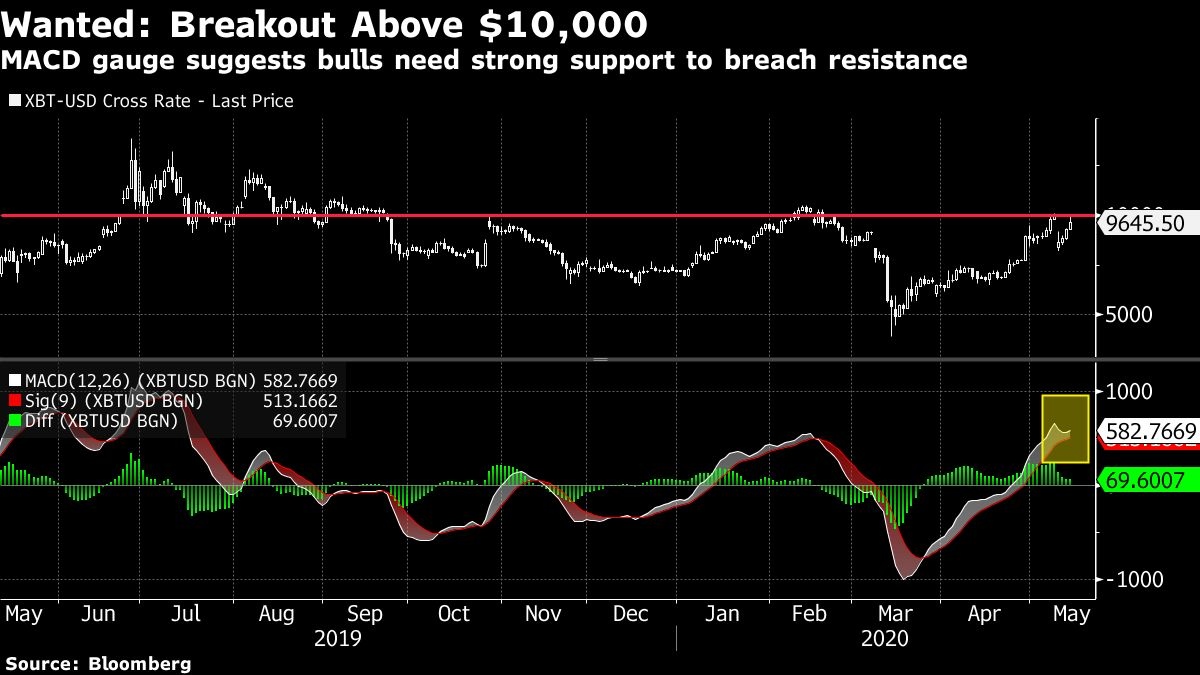 Bitcoin’s rally, with gains of more than 10 per cent this week, follows a monumental moment in the token’s history, with its third halving having been completed on Monday. The event, which reduces the rewards miners receive, was widely celebrated within the crypto community. Many crypto fans are betting that Bitcoin, akin to its previous two halvings, could rally in the aftermath.

Of course, not everyone agrees. Tim Hayes, chief global investment strategist at Ned Davis Research, says a stall for Bitcoin could be more likely. “The history of other deflated investment bubbles suggests that we won’t be seeing Bitcoin back at new highs any time soon,” he wrote in a recent note. Gold, he said, could be a more stable alternative.

But with the halving in the rear-view mirror, crypto investors are re-focusing on Bitcoin as an inflation hedge. That’s one of the reasons offered by famed investor Paul Tudor Jones, who said recently he’d been buying Bitcoin amid massive central bank money-printing.