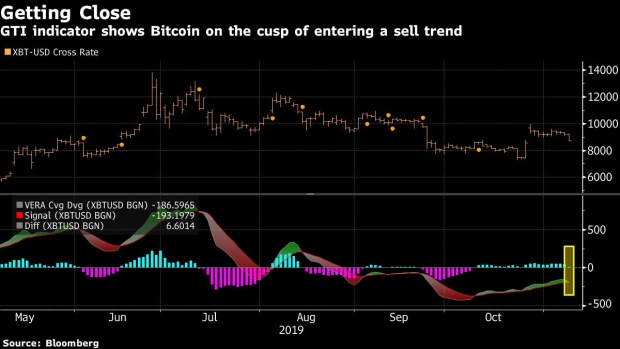 A token representing Bitcoin virtual currency sits among cables and LED lighting inside a 'mining rig' computer in this arranged photograph in Budapest, Hungary, on Wednesday, Jan. 31, 2018. Cryptocurrencies are not living up to their comparisons with gold as a store of value, tumbling Monday as an equities sell-off in Asia extended the biggest rout in global stocks in two years. Photographer: Bloomberg/Bloomberg , Photographer: Bloomberg

(Bloomberg) -- Bitcoin’s push back below $9,000 has a key technical indicator suggesting the cryptocurrency risks entering a selling trend.

The GTI Vera Convergence Divergence Indicator shows a narrowing gap between the signal and vera lines, which suggests a trend change may be on the horizon. If this occurs, the largest digital currency could retest the lows seen before its rampant run following comments by China’s President Xi Jinping in October.

Bitcoin rallied after Xi said that China plans to increase investment to “keep our country at the very forefront” of blockchain technology in the search for industrial advantages. Traders said speculators took those comments as a positive for the underlying technology that runs Bitcoin.

The cryptocurrency still faces resistance at the $10,000 level, with investors uncertain about what catalyst could help break that barrier.

“It’s had a decent move to the downside today, but to me, it’s going to remain range-bound for a while,” said JJ Kinahan, chief market strategist at TD Ameritrade. “I don’t know what the stimulus would be to take us outside of that range. It’s similar, to me, to what we see in the market overall.”

Bitcoin fell as much as 5.8% to $8,679 on Friday in New York trading, according to Bloomberg consolidated pricing. Other tokens such as Ether, Litcoin and XPR also slumped.