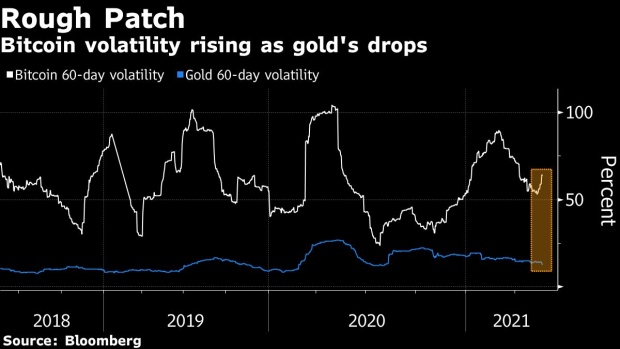 One-day swings of 31%. A slump amid a jump in U.S. inflation. Ever more critical regulatory scrutiny. Bitcoin delivered all of these in the past few days, undermining its claimed role as a portfolio hedge rivaling gold.

While true believers still tout Bitcoin’s merits as a store of value akin to digital bullion, recent events show how controversial that view is. The largest token has shed 40% after hitting a mid-April record, and its volatility compared with the precious metal jumped during this week’s cryptocurrency rout.

“For all of 2020 and pretty much up until April, Bitcoin has been the best performing asset, so it wasn’t hard to say it was an inflationary hedge given all the stimulus that keeps getting pumped into the global economy,” said Edward Moya, senior market analyst with Oanda Corp. “This week’s crypto plunge and rebound was a wake-up call. Bitcoin will still act like a leveraged risk-on trade and not a proper inflation hedge.”

Bitcoin’s 60-day realized volatility is far higher than that of gold and currently pulling away. The token tumbled 31% on Wednesday before rising by about the same percentage that day. For the week, it’s down some 10%, sapped by Elon Musk’s criticisms of its energy use, a Chinese regulatory broadside and a possible U.S. tax crackdown.

Gold, meanwhile, is heading for a third weekly gain, bolstered by a weaker dollar and wavering Treasury yields, which boost the allure of non-interest-bearing bullion. It’s also benefiting from the crypto crash, according to Brian Lan, managing director of Singapore-based dealer GoldSilver Central Pte.

For some commentators, Bitcoin is still evolving as an asset, making a rush to judgment premature. Its capped supply -- at 21 million tokens -- is among the features it shares with bullion, said David Lightfoot, chief executive officer of Sydney-based xbullion, a precious metal tokenization platform.

Bitcoin is still “finding its value” as a revolutionary new asset class, and similar volatility was seen after the discovery of oil as the world began to understand its impact and future worth, he said.