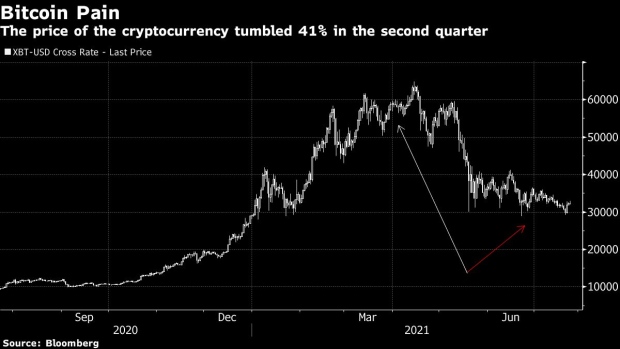 (Bloomberg) -- It’s time for Bitcoin’s corporate champions to account for a brutal selloff in the cryptocurrency.

Companies such as Tesla Inc. and MicroStrategy Inc. that have emerged as some of Bitcoin’s biggest backers will have to reckon with their digital holdings in earnings reports next week after the price of the token tumbled 41% in the second quarter. Square Inc., one of the few other large companies to add the cryptocurrency to its balance sheet, will report results in August.

The disclosures are likely to yield some eyebrow-raising write downs. Through quirks of accounting practices, however, there’s also potential for companies to simultaneously book big gains if they sold any of the digital currency at prices higher than originally paid.

“There will be repercussions from the volatility of the price in the quarter,” said Jack Ciesielski, an accounting analyst and founder of R.G. Associates Inc.

For most investors in Tesla, the world’s biggest maker of electric vehicles, Bitcoin’s fluctuations are of little consequence relative to continued innovation and progress in expanding sales around the world. Tesla’s market value ballooned in 2020 as investors bet it would maintain leadership in a future dominated by electric cars, but the stock has lagged this year. Some on Wall Street believe the company’s foray into Bitcoin is a contributing factor.

“It’s been a sideshow that’s cast a shadow on the stock,” said Dan Ives, a Wedbush Securities analyst, who has an outperform rating on Tesla. “It takes away from the story at a time when this tidal wave is just starting to take hold.”

Companies that hold crypto currently write down the value of the assets if the price falls below the acquisition rate, but they can’t recognize gains until there is a sale. So even though the average price paid for Bitcoin could be well below current prices, companies would have to record impairment charges when the market dips.

Most analysts, like Ives, don’t seem to be concerned about the impact of Bitcoin write downs or gains. Instead, they’re focused on Tesla’s sales performance in China and plans for full-self driving software.

Tesla generated a $128 million gain from the sale of tokens during the first quarter, a move Chief Executive Officer Elon Musk said earlier this month was aimed at demonstrating Bitcoin’s liquidity. Tesla, which held Bitcoin valued at more than $1.3 billion as of March 31, wrote off $27 million of its Bitcoin holdings in the same quarter. The Palo Alto, California-based company could face a much steeper charge in the second quarter after Bitcoin dropped beneath $29,000 at the end of June.

In contrast to Tesla, MicroStrategy has made Bitcoin a central part of its business, going so far as to sell bonds to fund purchases. Under Chief Executive Officer Michael Saylor, the software company has spent just over $2.25 billion on tokens as of May 18. Less than three weeks later, MicroStrategy warned of an impairment of at least $284.5 million. That quarterly writedown could end up being much larger after MicroStrategy raised $500 million in a private offering to boost its Bitcoin holdings and the price of tokens slid further.

In May, Musk shocked Bitcoin devotees by criticizing the sources of energy used to process transactions, sending the price of the cryptocurrency tumbling. While he remains personally invested in Bitcoin and said Tesla wouldn’t sell any, the company suspended vehicle purchases using tokens until the process for confirming transactions that is known as mining is powered by more renewable energy.

Musk gave Bitcoin enthusiasts something to be optimistic about this week, saying during an industry panel that mining is “shifting towards renewable energy” and his company will likely resume accepting the cryptocurrency as payment. But unlike the accounting classifications, investors may have to wait a bit longer to see the consequences of the pronouncement since Tesla hasn’t disclosed whether any customers have paid for a car with Bitcoin.