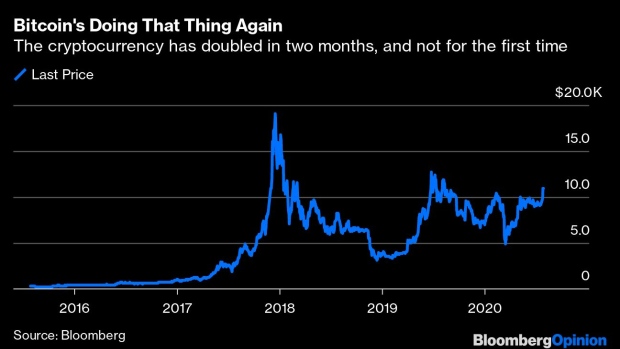 (Bloomberg Opinion) -- Bitcoin is doing that thing again. After a 50% slump in the cryptocurrency’s price to about $4,000 in mid-March, when Covid-19 panic was gripping the financial markets, it has bounced back to trade at about $11,200. Veteran crypto-watchers have seen this rapid shift from fear to greed many times before, and know it can have painful consequences.

The first time Bitcoin’s price went past five figures in 2017, it fueled a speculative frenzy that ended almost as soon as it began, leading to an 80% slump over 12 months. And when Bitcoin rose above $10,000 in February this year, any hope for a rally was snuffed out by Covid. The subsequent mad rush to trade digital coins for cash was made worse by the fact that many people were using large amounts of debt to back their trading. Several crypto hedge funds closed.

Is anything different this time? Bitcoin’s wild price swings undermine its case as a reliable store of value or safe haven. It’s still 43% below its high of almost $20,000. But as a “store of fear” — Warren Buffett’s description of the short-term pessimism that pushes investors into cryptocurrency — it has its fans.

As with gold, whose price has soared as central banks and governments spend trillions of dollars to fight the pandemic recession, some big New York names are talking up Bitcoin as a hedge against an inflationary spiral or currency crisis. Citing its algorithmically-controlled supply cap of 21 million, billionaire investor Paul Tudor Jones praised Bitcoin’s “scarcity premium” in May and said between 1% and 2% of his assets were held in the digital currency as protection in a low-interest-rate world. Medallion, the flagship fund of quant specialist Renaissance Technologies, got the go-ahead to invest in Bitcoin futures in April.

This market narrative of insurance against the financial apocalypse (almost like a grown-up version of the “money printer go brrr” meme) has some logic to it.

The recent stimulus-fueled stock-market rally has left 71% of fund managers thinking equities are overvalued, according to a Bank of America July survey. Diversifying into gold might make sense, particularly in a world where Covid-19 cases are flaring up once more. And for the fund manager forced to find winners in a market where everything’s up, a bit of Bitcoin might also work as “schmuck insurance” if the tenfold price rise it experienced in 2017 were ever to repeat itself. Bitcoin is more volatile than — and less correlated to — gold and equities these days, according to research firm Kaiko. That’s what makes it attractive to some risk-hungry hedge funds, who make their living from market swings.

The snag is just how dangerously unpredictable Bitcoin is — even when compared with gold, which has a habit of not doing what bankers expect. Demand for Bitcoin is speculative and emotional, rather than tied to fundamentals such as adoption of virtual currencies as an everyday payment method. And supply is squeezed artificially, not just algorithmically. An estimated 60% of Bitcoin supply is hoarded and 20% ‘lost’ or untouched, according to research firm Chainalysis.

As more hedge-fund sharks (and day-trader minnows who want to keep up with Tudor Jones and his ilk) head back into the murky waters of Bitcoin, they’ll be swimming alongside the “whales,” the big crypto investors who hold their fortunes in digital coin. The market moves of these individuals tend to thrash the price around.

Some whales will probably be looking for opportunities to cash out after life-changing gains. Investors holding between 1,000 and 1 million Bitcoin account for 42% of all Bitcoin supply.

As my Bloomberg Opinion colleague Aaron Brown put it last year: “I doubt they (the whales) have infinite patience, and without significant growth in actual use, I would expect them to quietly withdraw to chase other promising technologies.” So far, the market moves have been pretty noisy. Last year, a single large Bitcoin sale knocked 10% off its price. When the next sell-off hits, some of the harshest hedge fund critics of central-bank stimulus might wish for a bailout of their own.