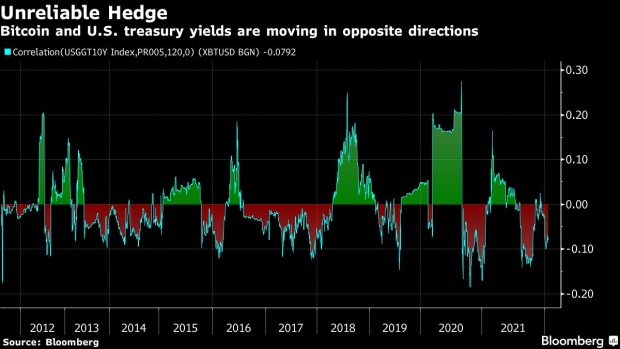 (Bloomberg) -- Bitcoin is proving that it’s not immune to the uncertainty around the Federal Reserve’s ability to cool the hottest inflation in nearly 40 years despite its billing by advocates as a hedge again rising prices.

The cryptocurrency’s recent tumble spotlighted how sensitive it is to broader market sentiments; hurting claims that it can offset the eroding impact of inflation. If Bitcoin is such a hedge, it should act more like gold which tends to track steadily amid market turbulence, according to Lindsey Bell, chief markets strategist at Ally Financial Inc.

“Now that inflation is rising -- and rising very rapidly -- crypto is not holding up as well as anticipated,” Bell said. “The volatile nature of crypto is really one of the biggest reasons why it’s not necessarily the best inflation hedge.”

A problematic relationship between Bitcoin and U.S. stocks has developed for those who support the hedging narrative. Notably, the correlation between the Nasdaq 100 and the S&P 500 reached record highs.

Both asset classes took a hit after recent Fed minutes revealed the likelihood of sooner-than-expected interest rate hikes, along with a sell-off among tech stocks. The central bank is expected to keep borrowing rates unchanged at the conclusion of Wednesday’s policy meeting.

Sam Doctor, chief strategist at Bitooda Holdings Inc, notes that correlation between Bitcoin and the stock market is particularly high on the worst performing days of the Nasdaq and the S&P. However, on non-directional days, its returns are less closely tied together.

Meanwhile, the 120-day correlation coefficient between Bitcoin and the yield on 10-year U.S. Treasury notes is -0.1, with 1 indicating lockstep moves, shows close to zero connection.

Eric Ervin, chief executive of Blockforce Capital, said investors bought into Bitcoin and other assets in anticipation of inflation, which lead to Bitcoin’s all-time high in November. Going forward, he expects corrections as policymakers ease off of funneling stimulus into the economy.

“The market is starting to price in some cooling off of those inflation expectations and Bitcoin is starting to selloff accordingly,” Ervin said. “If we start seeing this inflation continues to go and go and go, and the Fed doesn’t have control over it, then I think we’re in for a world of hurt.”