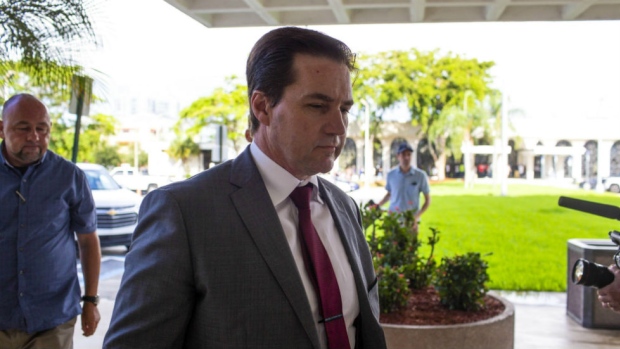 Craig Wright, self declared inventor of Bitcoin, arrives at federal court in West Palm Beach, Florida, U.S., on Friday, June 28, 2019. Wright must reveal how much of the digital currency he owns in a suit accusing him of swindling a collaborator out of more than US$5 billion, half of the alleged stash. , Saul Martinez/Bloomberg

The man who claims he invented the world’s largest cryptocurrency and was ordered by a judge to surrender about US$3 billion of his Bitcoin holdings said he may not be able to do so anytime soon.

In a statement to Bloomberg News, Craig Wright said that he “cannot be certain that information will in fact arrive” to help identify the coins he has to split in a legal dispute. The Australian scientist added that he hasn’t said the “private keys” to those coins would become available or be actually used next month.

Earlier this year, U.S. Magistrate Judge Bruce Reinhart in West Palm Beach, Florida, said Wright submitted false documents and lied in the legal dispute. He ruled that the late Dave Kleiman owned half of all Bitcoins that Wright mined through 2013, and half of all intellectual property he created. At the time, half of the Bitcoins was valued at about US$4 billion, but the digital token’s price has declined since. The ultimate test may be whether Wright is actually able to deliver the Bitcoins to his former partner’s estate.

Wright is a controversial figure, with many in the cryptocurrency community believing he didn’t invent Bitcoin and doesn’t have any extensive holdings. Still, some investors have been concerned that a dump of the coins, supposedly locked in a complicated trust holding about US$6 billion, could affect the market.

“I do not intend to dump my family’s BTC as some people suspect or want, as this would hurt many people in the industry,” Wright said in the statement, referring to his Bitcoin fortune.

Judge Reinhart found “clear and convincing evidence” that demonstrates the encrypted trust file doesn’t exist and that Wright’s testimony about it was “intentionally false,” Vel Freedman of Roche Freedman LLP, representing the Kleiman estate, said in an email. The plaintiffs’ position has always been that Wright has access to the Bitcoin now and “no bonded courier” needs to arrive for him to get access, he added.

The lawsuit hasn’t been resolved yet.