In the crypto world, Bitcoin continues to reign supreme.

The largest digital asset is outperforming the next three biggest alternatives this year. It’s managed to hold above the key US$10,000 level in the face of increasing headwinds. In times of recent market turbulence, it’s even taken on somewhat of a safe-haven accreditation.

But technical indicators show the price action between Bitcoin and alternative tokens is nearing its highest correlation this year, indicating that a so-called alt season may be on the horizon. Alternative coin prices appear to be mimicking Bitcoin nearly one-to-one, with the highest correlation happening between Bitcoin and Ether, according to data compiled by Bloomberg. 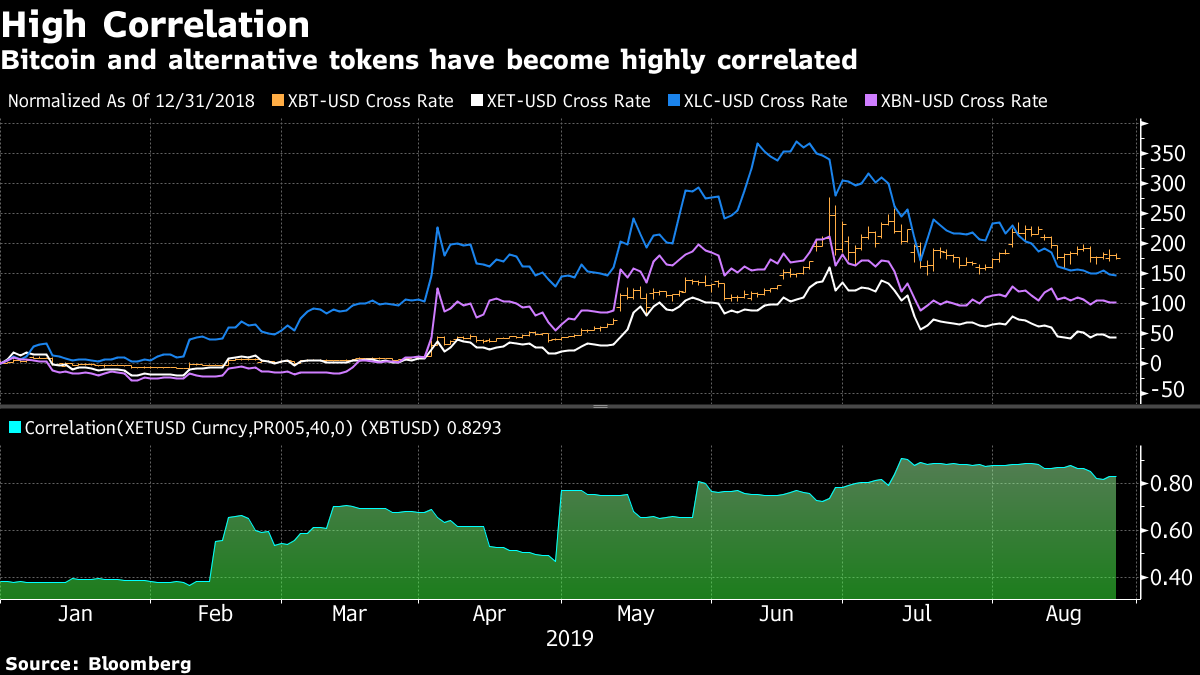 The correlation can be “attributed to the consolidation pattern we have seen in the crypto space,” said Ed Moya, chief market strategist at Oanda Corp. “Volatility has eased quite a bit over the past couple of weeks as regulatory concerns and future hurdles have somewhat eased.”

Cryptocurrencies have rallied across the board this year thanks to expectations of greater institutional adoption and plans by Facebook Inc. to launch its own stablecoin. Bitcoin has gained about 175 per cent in 2019, outperforming tokens including Litecoin, up close to 150 per cent, and Bitcoin Cash, which has more than doubled. Ether has gained about 40 per cent in that period.

Bitcoin’s outperformance can be tied to its overall dominance, which has increased to levels not seen since April 2017, according to Ryan Alfred, president of Digital Assets Data, a data platform. The trend could indicate a consolidation in the crypto space of money from alt coins flowing into Bitcoin. The correlation may be short-lived, he said.

CoinCorner, a crypto exchange, is seeing a similar trend. More than 90% of the company’s customer transactions are related to Bitcoin. Ethereum, Litecoin and Ripple make up about seven per cent, said Danny Scott, the firm’s chief executive officer.

“Altcoins are slowly dying out in respect of interest when compared to Bitcoin,” he said. “As always in this industry, it eventually comes back to Bitcoin.”