Bitcoin tumbled again, driving the token to the brink of US$20,000 as evidence of deepening stress within the crypto industry kept piling up.

There’s a growing sense of anxiety about the stability of crypto projects large and small. Tron founder Justin Sun’s roughly month-old stablecoin USDD drifted from its intended dollar peg, at one point dipping below 96 cents, data from CoinGecko show. A tweet from the co-founder of crypto hedge fund Three Arrows Capital fueled speculation that it had suffered large losses.

Bitcoin fell as much as 8.6 per cent on Wednesday US$20,081.95. The largest token has fallen for nine straight days, the longest losing streak since 2014. Ether was on the cusp of breaking the US$1,000 mark after a 10 per cent plunge.

A market that started sliding late last year on expectations of tighter monetary policy is now showing signs of widespread panic, after last month’s collapse of the Terra blockchain and the recent decision by crypto lender Celsius Network Ltd. to halt withdrawals. Even long-term holders who have avoided selling until now are coming under pressure, according to researcher Glassnode.

“What we’re seeing now are the weak hands exiting the market as we wash out the excess of what in retrospect can only be seen as an overextended build up of speculation and leverage,” said Mati Greenspan, founder of Quantum Economics. 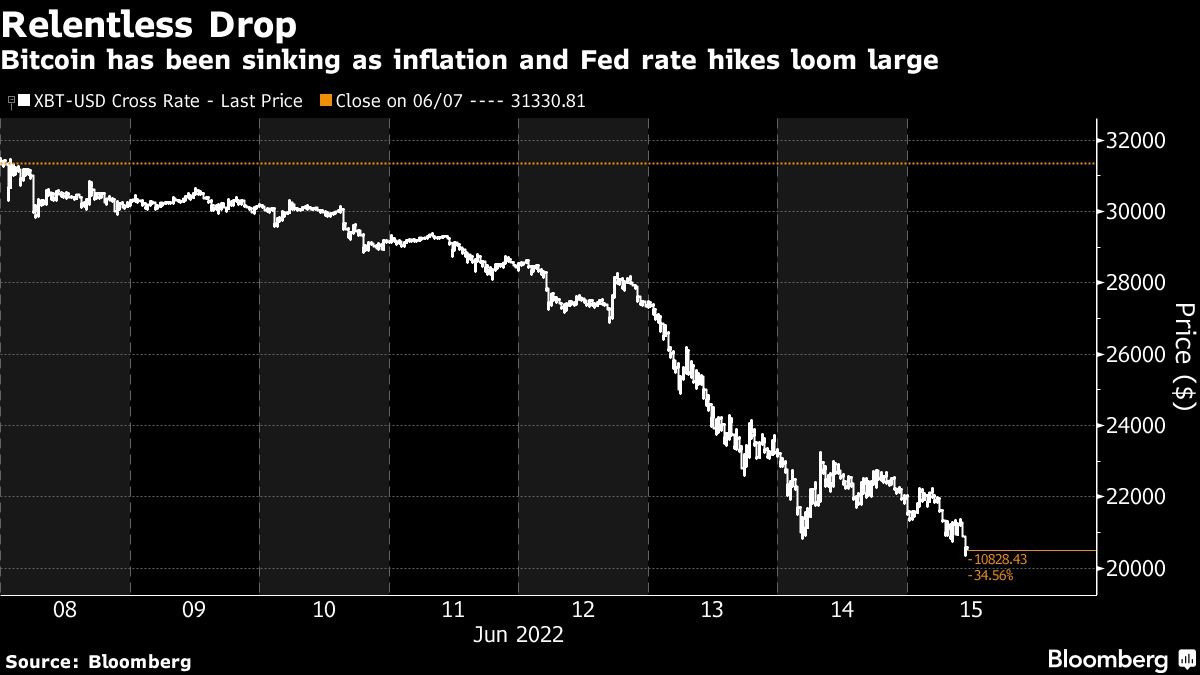 Historical data show that Bitcoin may find key support around the US$20,000 level, as previous selloffs demonstrate where the token usually finds points of resilience, according to Mike McGlone, an analyst for Bloomberg Intelligence.

Fresh apprehension was triggered on Wednesday with traders closely watching developments from the Tron DAO Reserve, the entity that oversees the cryptocurrency reserves backing USDD. The group said on Wednesday that it planned to withdraw 2.5 billion TRX tokens from the Binance crypto exchange in an apparent attempt to counter the selling pressure. Sun has repeatedly taken to Twitter this week to tout efforts to support USDD’s peg.

The Tron network’s governance token TRX, which has come under attack from short sellers in recent days, has dropped 14 per cent in the past 24 hours.

Adding to the market’s nerves, the founder of Three Arrows Capital, an influential hedge fund that has been liquidating crypto holdings, posted a vague tweet. “We are in the process of communicating with relevant parties and fully committed to working this out,” former Credit Suisse Group AG trader Zhu Su tweeted from his verified account, without providing further details.

The crypto market now stands at a fraction of its heights in late 2021, when Bitcoin traded at a heady US$65,000 and traders poured cash into speculative investments of all stripes. The total market cap of cryptocurrencies is US$925 billion, down from US$3 trillion in November, according to CoinGecko.

With prices continuing to dive, there are more predictions that losses will accelerate if key levels are broken.

“If these levels break, US$20,000 Bitcoin and US$1,000 Ether, we can expect massive sell pressure in the spot markets as dealers hedge themselves,” BitMEX co-founder Arthur Hayes said in a tweet.