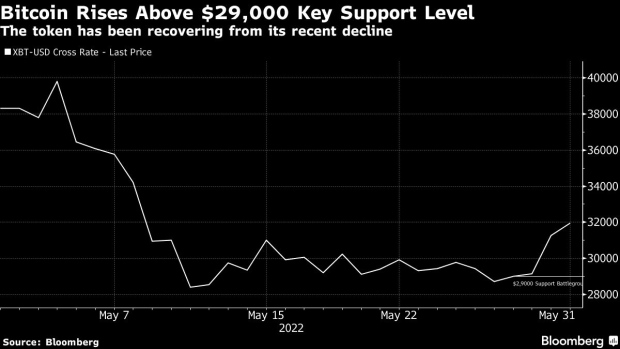 (Bloomberg) -- While Bitcoin is higher for a fourth day, some closely-watched technical measures suggest that prices could drop to the lowest since December 2020 if the largest cryptocurrency fails to maintain support at $29,000.

Bitcoin is trading above $30,000 on Tuesday as it recovers from a sharp decline in the past three weeks. However, it’s still down 16% in May. Smaller tokens have bounced back as well, with Ether nearing $2,000 and Cardano’s ADA spiking by as much as 25%, partly due to its network upgrade.

But Bitcoin’s recent recovery may be a blip before another steep drop, instead of a sustained reversal of its recent decline. Based on the token’s price movement patterns in the past, it could sink as low as $22,130 if it fails to defend its key support level.

“If it can hold the psychologically important $30,000 level, it could range-trade to resistance at $40,000,” Jamie Douglas Coutts, senior market structure analyst at Bloomberg Intelligence, wrote in a report. “Technically, a break below $29,000 would confirm an ominous double-top pattern with next support at the May low of $25,424, then the 200-week moving average at $22,130.”

In the second half of 2022, seasoned investors will likely turn their attention to Bitcoin halving, which is a pre-programmed update that cuts Bitcoin rewards for miners in half every four years, Coutts wrote. Halving boosts the price of Bitcoin since it results in a smaller supply of the token. The next such event is expected to take place in mid-May 2024.

“Bitcoin usually performs most strongly in the 12 months after each halving as daily issuance shrinks,” Coutts wrote.