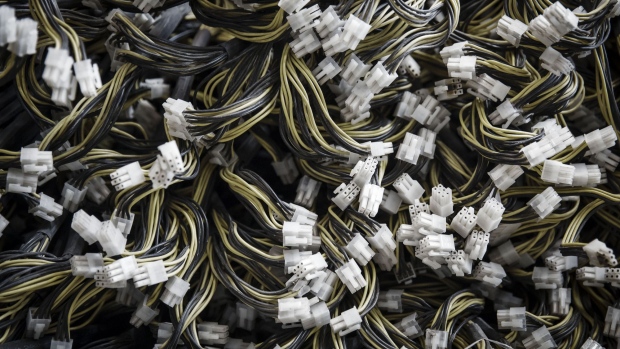 Cables for bitcoin mining machines sit on the floor at a mining facility operated by Bitmain Technologies Ltd. in Ordos, Inner Mongolia, China, on Friday, Aug. 11, 2017. Bitmain is one of the leading producers of bitcoin-mining equipment and also runs Antpool, a processing pool that combines individual miners from China and other countries, in addition to operating one of the largest digital currency mines in the world. , Bloomberg

Even though Bitcoin is on pace to post its worst month this year, technical signals show its recent downturn could be coming to an end.

Over the weekend, Bitcoin retested its initial May gap that preceded a subsequent rally, potentially indicating its retreat could be running out of steam. That gap, which measures large price swings between open and closing prices between trading days, has been filled, with the coin retracing to the same price level prior to the May rally. That means Bitcoin could find support around the US$6,500 level, or about 8 per cent below its current price.

In addition, Bitcoin is vastly oversold, according to its 14-day relative strength index, which sits at 25. Assets are seen as being oversold once they hit 30 or lower.

Cryptocurrencies have been on a persistent downtrend this month after China took steps to crack down on virtual-currency trading. The People’s Bank of China said this week that more than 170 Chinese platforms that offer crypto trading and initial coin offerings services have shut down. That follows an earlier report that the PBOC asked investors to be wary of virtual currencies and told businesses involved with digital assets to correct any improper actions.

The sell-off has pushed Bitcoin lower for 10 consecutive sessions, including Tuesday’s. Its 23 per cent drop in November has put it on track for its worst monthly performance this year.

“The market is clearly in contraction, with no new money coming in to soak up the supply,” said Jeff Dorman, chief investment officer at Arca. “The market has been remarkably weak,” he said, thanks to a string of negative developments, including China’s clampdown.

Bitcoin fell as much as 2.6 per cent on Tuesday to trade around US$7,028 in New York. That’s its lowest level in six months. The Bloomberg Galaxy Crypto Index, which tracks some of the largest cryptocurrencies, dropped as much as 1.6 per cent, to trade at its lowest since April.