Bitcoin failed to hold overnight gains, losing more ground Wednesday as it continued on course for its worst month since May.

The volatile token was trading 1.3 per cent lower at US$46,965 as of 7:48 a.m. Wednesday in New York, following a near 7 per cent drop the prior session. It has retreated some 18 per cent this month, while the wider crypto universe has shed about US$420 billion of market value over the period, according to tracker CoinGecko.

Demand for the most speculative investments has waned as 2021 comes to a close, in part as the Federal Reserve pulls back on the exceptional stimulus that helped to lift a variety of assets this year. Some analysts say the reversal will be brief.

“I suspect year-end book squaring into thin market conditions exaggerated the range,” said Jeffrey Halley, a senior market analyst at OANDA. “There is nothing to suggest that Bitcoin’s recent US$45,000 to US$52,000 is under threat.”

On Wednesday, other coins also got hit hard, with Cardano and Solana losing more than 8 per cent each, and Polkadot falling nearly 6 per cent, according to CoinGecko. 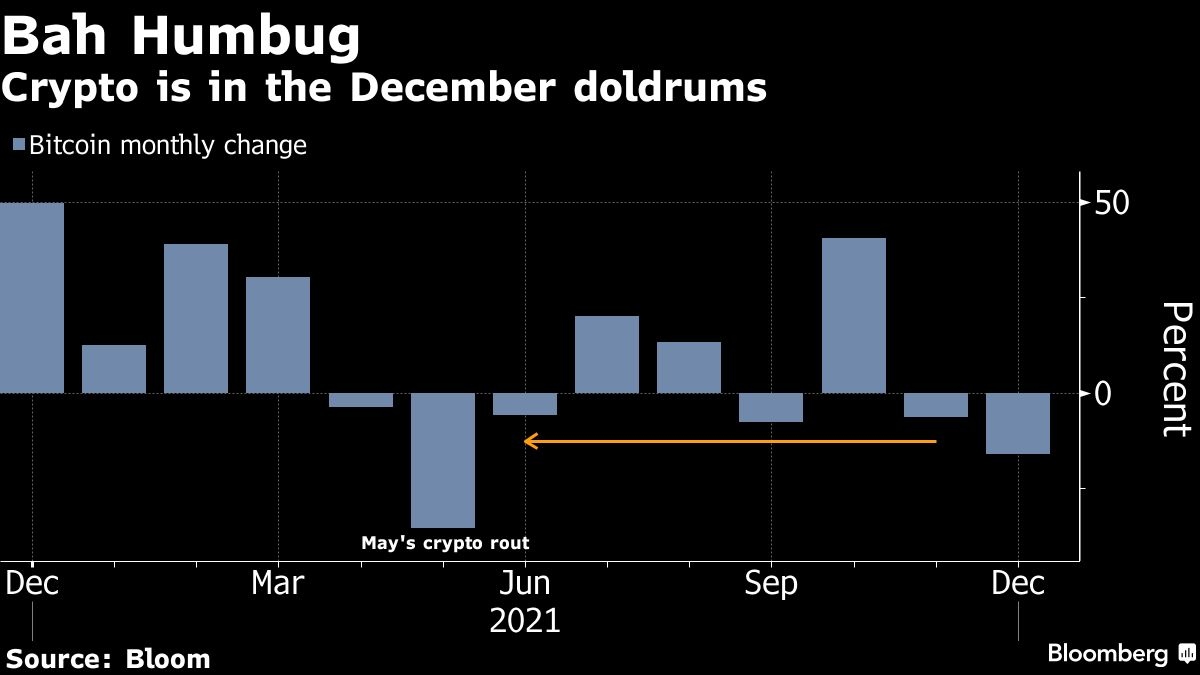 Strategists are keeping an eye on key technical levels to discern clues about Bitcoin’s direction.

Katie Stockton, founder and managing partner of Fairlead Strategies, an independent research firm focused on technical analysis, said Bitcoin’s next level of support is around US$44,200, based on a Fibonacci retracement.

The token’s wobble this month has pared its year-to-date climb to about 65 per cent, still ahead of traditional assets including global equities and commodities.

Crypto adherents expect Bitcoin will resume its advance and head back toward the record US$69,000 it reached last month. Among their arguments is the controversial idea that the token offers a hedge against inflation.

“The arc of history is long,” Graham Jenkin, chief executive officer of crypto exchange CoinList, said on Bloomberg Television. “Over time Bitcoin is going to be a pretty superior asset to invest in.”

It could be that a dip in trading volumes over the Christmas holiday period is exacerbating price moves.

“I’m going to go out on a limb though and classify this as low-volume, holiday-season funk,” said Mati Greenspan, founder of market analysis, advisory and money management firm Quantum Economics, referring to recent performance.