Bitcoin held below US$40,000 after Amazon.com Inc. pushed back against speculation it will accept the token for payments this year.

The largest digital currency was little changed at US$37,532 as of 11:37 a.m. in London. Rival coins including Ether retreated.

The moves suggest that Bitcoin’s latest roller-coaster ride is starting to fizzle out. On Monday, prices soared on the back of a Amazon executive job posting linked to crypto. The rally quickly ran out of steam hours later, after a company spokesperson denied the token will be accepted for payments this year.

Investors rushing to cover bearish bets also helped propel Bitcoin’s earlier advance to a peak of US$40,545, its highest since June 15. More than US$950 million of crypto shorts were liquidated on Monday, the most since May 19, according to data from Bybt.com.

“Shorts were piling up as we were moving down, assuming we were looking at a minimum of US$25,000, which was expected across the board,” said Vijay Ayyar, head of crypto exchange Luno’s Asia Pacific business. “But then there was heavy accumulation in the US$29,000 to US$30,000 region, which caught a lot of those shorts unaware and hence led to the spring upwards.”

Bitcoin’s price volatility is part of a wider, multi-wave correction since a record high was reached in April, Ayyar said. The price could rebound as high as US$45,000 in the near term before another potential drop, he said.

“We’re still seeing the correction play out,” he added.

The latest gyrations came amid concerns about a chill in the crypto industry after Bitcoin’s hot run to a record of almost US$65,000 faded amid rising regulatory and environmental concerns. There are plenty of factors traders can point to for this week’s moves, as proponents look for the next catalyst to break the coin out of its tight trading range of US$30,000 to US$40,000 in recent months.

“Bitcoin‘s biggest risk this week could be a hawkish surprise from the Fed, which might explain why prices have not yet been able to clear the psychological US$40,000 level,” said Edward Moya, senior market analyst with Oanda Corp. The Federal Reserve will announce its next rate decision Wednesday.

Bloomberg News earlier reported a U.S. probe into Tether is homing in on whether executives behind the token committed bank fraud. 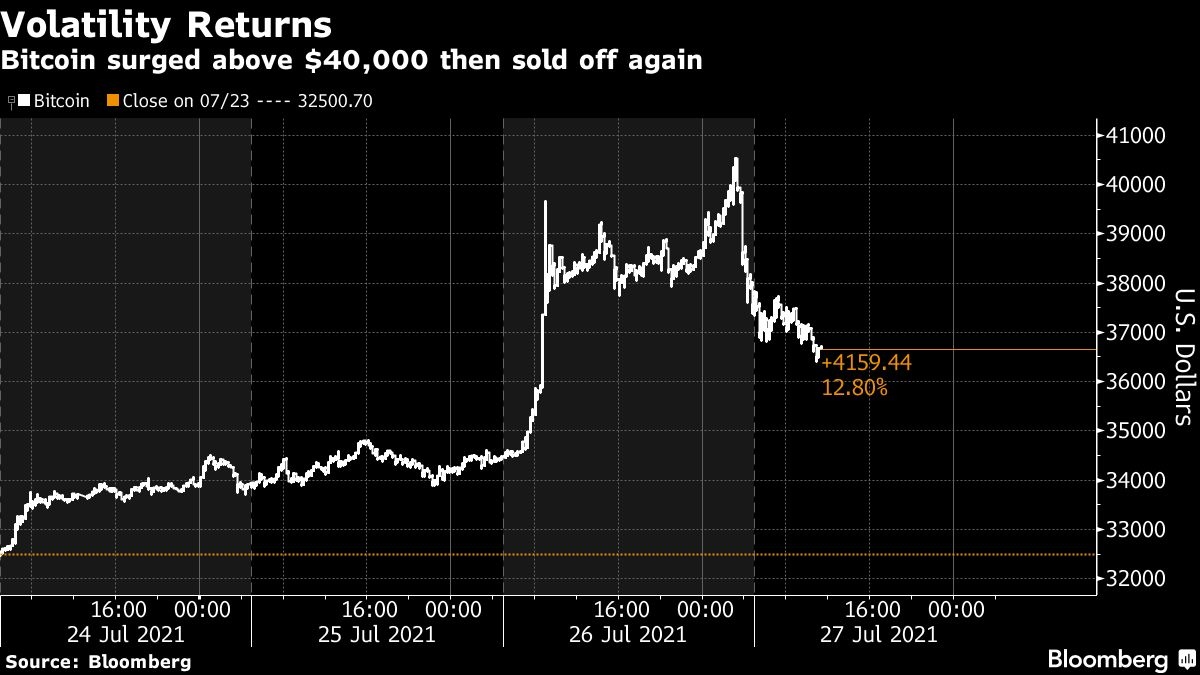