Bitcoin’s selloff accelerated Monday, pushing it closer to US$30,000 once again.

The world’s largest digital coin, down as much as 3.3 per cent at one point during the session, continues to ebb closer to the pivotal round-number level, trading around US$30,628 as of 9:41 a.m. in New York. Chartists are watching to see if it breaks below that support, which could exacerbate its decline and set it up for its lowest close since the start of the year.

The retreat comes amid a broader risk-off environment that’s also seen U.S. equities fall due to fears of slowing growth and a relentless spread of the delta variant of COVID. The Bloomberg Galaxy Crypto Index, which tracks some of the largest digital coins, fell as much as 5.7 per cent to its lowest point in nearly a month.

“Investing in these cryptocurrencies is based on confidence and liquidity, and as you have a little bit less confidence, you just have a more challenging short-term environment for the cryptocurrencies,” said Keith Lerner, chief market strategist at Truist Advisory Services. 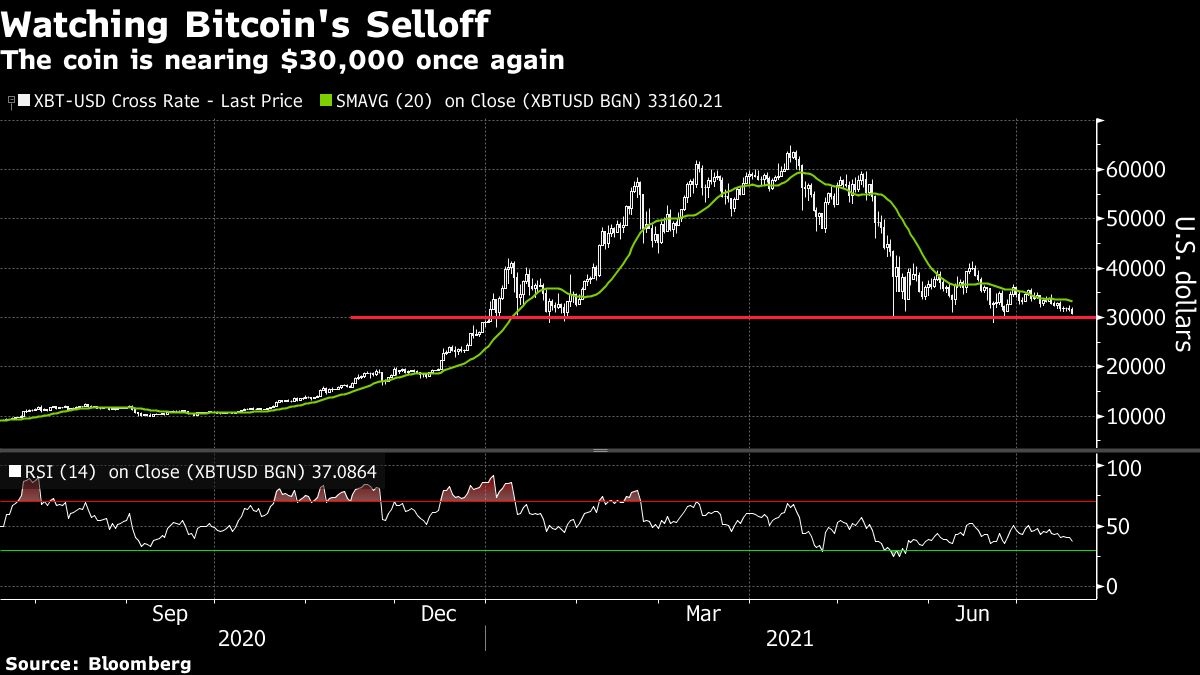 That’s also put Bitcoin’s claim of being an inflation hedge to test. Fans had argued the digital asset could, thanks to its limited supply, act as a hedge against rising prices. The coin has declined more than 10 per cent so far in July and its year-to-date advance has narrowed to just 6 per cent, meaning that the S&P 500 is outpacing it by roughly 9 percentage points.

“It’s premature to say these provide a good hedge. In our view it’s more of an area of speculation -- when risk is coming off the market, you also see that in the crypto market,” said Lerner. “The market is looking at this more as a speculative area of the market and when you have a selloff, the speculative areas of the market tend to get hit.”

Though Bitcoin’s been declining in recent days amid hotter-than-expected inflation prints, it could still prove to be a good hedge over the long term. And in the short-term, there is an additional reprieve. Bitcoin’s 14-day Relative Strength Index (RSI) -- currently at 37 -- is nearing oversold levels, which in the past has preceded bounces. But the coin needs to ensure it holds support at US$30,000 as any significant breach could drive a large technical selloff.