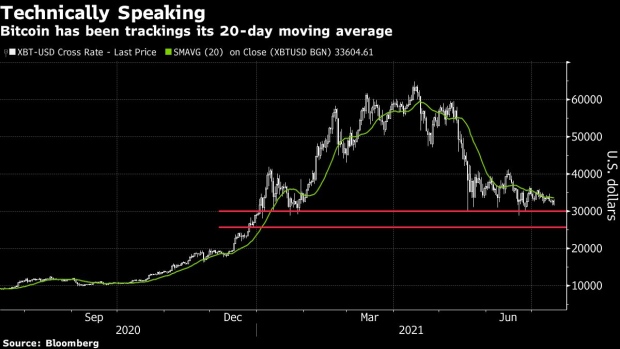 (Bloomberg) -- Bitcoin’s slide accelerated Thursday, with the coin drifting toward $31,000 once again while strategists eye a potential break lower.

The world’s largest digital asset fell as much as 4.1% to $31,472, its lowest level in about three weeks. Other cryptocurrencies also retreated -- Ether dropped more than 5% at one point while Litecoin lost a similar amount. The Bloomberg Galaxy Crypto index, which tracks some of the largest cryptos, fell 4.6% at one point.

The moves come as cryptocurrencies and the prospect of digital money backed by central banks -- otherwise known as CBDCs -- become a topic of interest once again, with Federal Reserve Chair Jerome Powell in a hearing this week stressing the need to get such a project right. At the same time, the European Central Bank took a major step toward a digital euro by approving an “investigation phase” that could potentially lead to a virtual currency being implemented around the middle of the decade, Bloomberg reported.

“With the talk of central banks around the world exploring ideas for digital currencies, investors are realizing there’s a lot of competition in the space. That might dilute the valuation of some of the digital assets currently being used,” said Brian Vendig, president of MJP Wealth Advisors. “There are a lot of things out there that investors are weighing, and digital assets might be losing their shine a bit because they are volatile.”

Others agree that the prospect for CBDCs could put pressure on the original cryptocurrency. “The edge away from crypto wallets comes as speculation surges about the impact of central banks around the world launching rival digital currencies,” said Susannah Streeter, senior investment and markets analyst at Hargreaves Lansdown.

Bitcoin has been having a hard time as of late. It’s been tracking its 20-day moving average, though it’s already trading below it and has struggled to jump above it sustainably. The coin could soon be approaching what many view as a critical support level -- $30,000. A breach below that could indicate the coin continues its decline toward $25,000, which it hasn’t tested since late December.

Meanwhile, hardcore enthusiasts who have been arguing that Bitcoin and some other cryptocurrencies are a hedge against rising consumer prices and excessive money printing from global central banks are seeing that argument put to the test amid hotter-than-expected inflation prints in the U.S.

MJP Wealth’s Vendig said that argument could have some flaws. “The reality is that because there has not been a pervasive productive use of blockchain technology in our society, people have pulled back a little bit and are recognizing it is a more speculative investment,” he said.

Still, to Chris Gaffney, president of world markets at TIAA Bank, recent chatter about CBDCs might not be a complete negative.