Bitcoin slid below US$60,000 as euphoria over the first U.S. crypto ETF dissipated and traders took profits following a record-breaking rally.

The biggest digital asset by market value fell as much as 6.4 per cent to US$58,132, reaching the lowest intraday price in almost two weeks. It peaked at US$66,976 on Oct. 20. Ether also sank about 7.5 per cent and smaller tokens took a hit as well, with Dogecoin and Solana each tumbling more than 8 per cent. The Bloomberg Galaxy Crypto Index, which tracks some of the largest digital coins, fell 7.5 per cent at one point.

“I’m not surprised Bitcoin hit a wall at US$67,000, having passed the April high, given the speed of the move from US$30,000 in July,” said Antoni Trenchev, managing partner and co-founder of Nexo, a crypto lender. “Bitcoin needs to cool off before it embarks on its next leg up.”

Many smaller “alt” coins got hit the hardest: Cardano lost 11 per cent over the last 24 hours and Polkadot dropped roughly 9 per cent, according to Coinmarketcap.com.

“They’ve always been more volatile, so it’s not a big surprise,” said Matt Maley, chief market strategist for Miller Tabak + Co. “Those cryptos are held in weaker hands. Most people think that a small number of these alt will survive, so they tend to sell them more quickly than Bitcoin or Ethereum.” 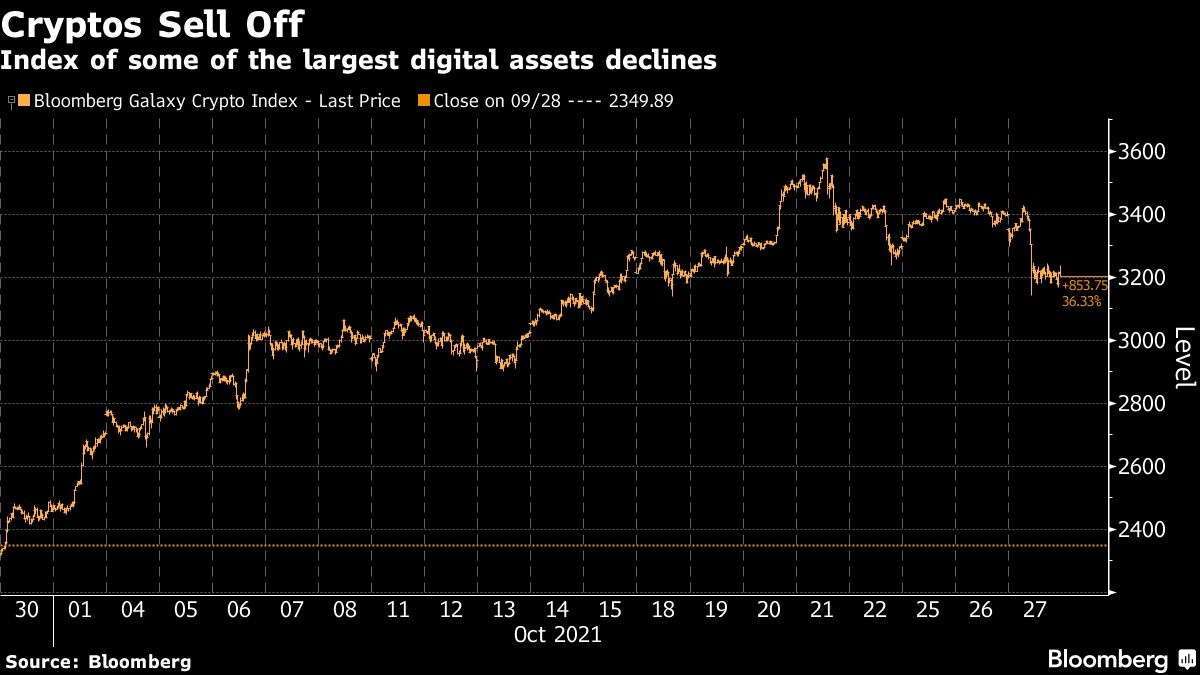 Speculators are cutting back on positions after the launch of the first U.S. Bitcoin exchange-traded fund fanned enthusiasm and pushed prices to new all-time highs, analysts said. Total liquidations of long crypto positions topped US$700 million on Wednesday, the most since Sept. 20, according to data from Bybt.com.

“The market has been leveraged long for a few weeks, so there has been that overhang in positioning,” said Jonathan Cheesman, head of over-the-counter and institutional sales at crypto-derivatives exchange FTX.

Stephane Ouellette, chief executive and co-founder of FRNT Financial Inc., a crypto-focused capital-markets platform, said some of the elation around the ETFs has vanished and the sell-off has been exacerbated by the fact that there is much more leverage available in crypto for retail traders globally than there is in other asset classes.

“We already saw a wave of quite severe leverage come into the space which was evidenced by futures contangos, perpetual swap and peer-to-peer lending rates all spiking around the launch of the BTC ETF,” Ouellette said. “In the last few weeks, for example, we saw monthly and quarterly BTC futures contangos in the 20-to-30 per cent range. While leverage can in some cases get even more extreme, the activity over the last few days has some tell-tale signs of a typical crypto check-back.”

Ouellette cited December BTC futures contango dropping overnight to 13.5 per cent from around 20 per cent annualized on the FTX cryptocurrency derivatives exchange. Contango occurs when futures trade at a premium to spot prices. 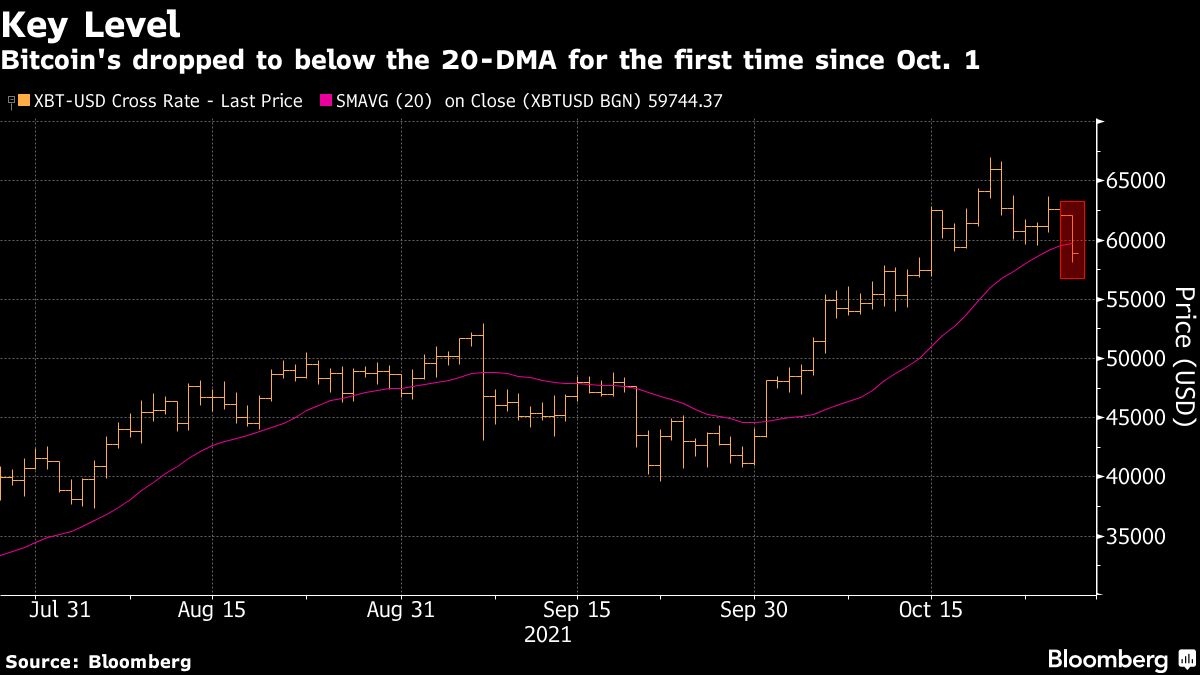 Bitcoin also fell below its 20-day moving average, a technical move that could invite more selling. Nexo’s Trenchev, meanwhile, says there’s a clear “head-and-shoulders” pattern present, with US$60,000 being a key level.

In crashing through US$60,000, Bitcoin breached its previous resistance-turned-support level; its latest leg lower means it could find support around its 50-day moving average of about US$51,555. In addition, its selloff over the last two sessions has brought its 14-day relative strength index (RSI) from overbought levels to nearly neutral.

The ProShares Bitcoin Strategy ETF, or ticker BITO, accumulated more than US$1 billion in assets in just days after its launch last week. For crypto fans, their premieres marked a watershed moment because they signify further mainstream acceptance and allow investors to buy into an investment vehicle that is readily available to a wider pool of people.

“The price slump is being fueled by sellers, who appear to be acting simultaneously in taking profits on their investment,” said Petr Kozyakov, co-founder and CEO of the global payments network Mercuryo. “The price correction is an organic one and was not triggered by a clear-cut fundamental.”