The view that Bitcoin is a hallmark of speculative excess and froth is still going strong, even after last month’s 35 per cent plunge.

About 80 per cent of fund managers surveyed by Bank of America Corp. called the market a bubble, up from 75 per cent in May. The poll, which captures the view of 207 investors with US$645 billion in assets, said “long Bitcoin” is the second-most crowded trade after commodities.

The results point to a skepticism among some professional managers about whether crypto is a viable asset class, given its extreme volatility and regulatory uncertainty. Bubble fears are nothing new for cryptocurrencies, and plenty of investors have voiced doubts over the wisdom of wading into an asset that has no fundamental underpinning. 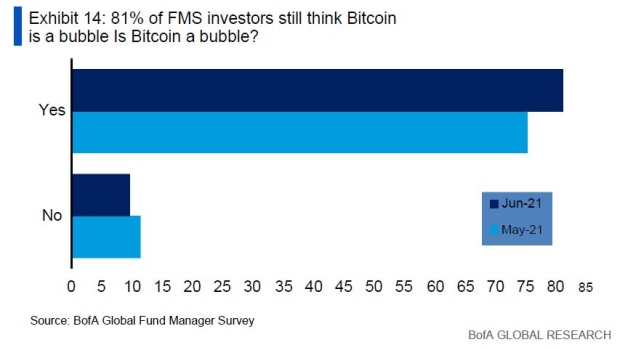 Even though prices have tumbled, investment banks are still embracing the emerging asset class. Goldman Sachs Group Inc. said it plans to roll out derivatives tied to Ethereum to clients, and Cowen Inc. plans to offer “institutional-grade” custody services for cryptocurrencies.

Prices also got a boost this week from veteran hedge fund manager Paul Tudor Jones, who reiterated his view that Bitcoin is a good hedge against inflation.

Other highlights from survey, which was conducted June 4 to 10, include: