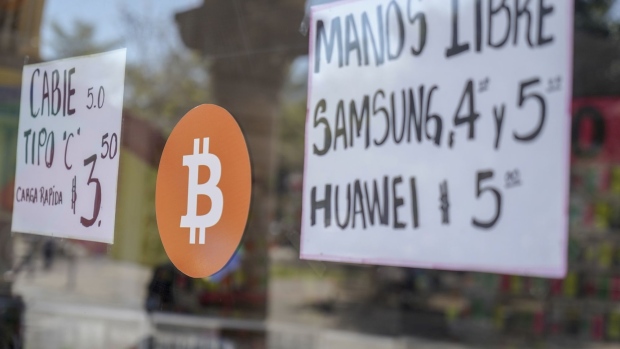 A sign announcing the acceptance of Bitcoin as a payment method displayed at a store in San Salvador, El Salvador, on Saturday, Jan. 29, 2022. The International Monetary Funds board urged El Salvador to strip Bitcoin of its status as legal currency due to its large risks, highlighting a major obstacle for the nations efforts to get a loan from the institution. Photographer: Camilo Freedman/Bloomberg , Bloomberg

(Bloomberg) -- Bitcoin is struggling to gain traction in El Salvador -- the first country to accept it as legal tender -- after many Salvadorans stopped using the government’s Bitcoin wallet known as Chivo and only a tiny fraction reported using it for remittances, taxes and daily purchases.

A survey by the U.S. National Bureau of Economic Research in partnership with Cid Gallup found that only 20% of respondents in El Salvador continued using the Chivo wallet after downloading it and spending the initial $30 signup bonus. Most downloads occurred last September, when Bitcoin was first authorized for use in El Salvador allongside the dollar, and virtually no one has installed Chivo on their phone in 2022, according to the study.

“The most important reason not to download the app, conditional on knowing about it, is that users prefer to use cash, which was followed by trust issues -- respondents did not trust the system or Bitcoin itself,” the study said.

El Salvador’s Bitcoin gambit has been watched closely by the cryptocurrency world and beyond, and could help determine whether other countries follow suit. President Nayib Bukele said Bitcoin transfers will help Salvadorans save $400 million a year in remittances fees and provide financial services to the 70% his nation’s citizens who don’t have a bank account. Meanwhile, the International Monetary Fund has urged El Salvador to strip Bitcoin of its status as official currency as talks for a $1.3 billion program with the multilateral lender have stalled. The government’s plan to issue a Bitcoin bond, originally scheduled to launch in March, have also been delayed.

The survey found no evidence the Chivo wallet is being used to pay for taxes and remittances at a significant scale, in line with El Salvador Central Bank data showing only 1.6% of remittances were sent through digital wallets in 2022. Among companies, 20% reported accepting Bitcoin as a form of payment and most of them were large firms. On average, 5% of all sales were in Bitcoin and most transactions were converted to dollars, the study found.

Pollsters conducted face-to-face interviews with adults in 1,800 households throughout El Salvador in February 2022. The survey has a 2% margin of error.